At only 13, Maika E. Branch of Moncton already has two novels under her belt: Calagarmii Cliffs (2013) and the soon to be released Sisters of Serenah, a fiction fantasy for young adults. The launch date is set for 2 pm on Saturday April 30th, 2016, at the Riverview Public Library, 34 Honour House Court. Maika will read from her new book and looks forward to meeting fans, friends, and aspiring young writers. Everyone is welcome!

Skye and Larah live alone in the forest of Serenah, where huge sprawling trees grow for miles around in the untamed wilderness. The two sisters live together, surviving off the land, their wits, and their powers to morph. Skye can turn into any animal that takes to the air, and Larah into those who keep to the land. They live their life in solitude. Until, that is, they celebrate the most important night of the year (and their birth).

But their festivities are cut short when Skye finds an unconscious boy in the snow. After a few days, he reveals himself as Tai, and he is not from this world. The sisters teach him to hunt, build, and survive in the forest, and perhaps he will soon be ready to go his own way. However, a hurricane wreaks havoc on the forest, and the three are suddenly forced to find a new home far away from Serenah. Gathering all their wits and courage, they set off on the adventure of a lifetime.

Maika-Evelyn Branch resides in Moncton, NB, where she attends middle school. Having a Dutch mother and a French-speaking father, she learned to speak three languages at a young age and soon discovered a passion for reading and writing.

Maika’s first book, Calagarmii Cliffs, started out as a personal summer project that she wrote at age 10. Calagarmii Cliffs was published by Redemption House Publishing in April 2013, and to date has sold nearly 1000 copies. Thanks to the success of her book, as well as to her public presence, Maika is often called upon as a motivational speaker for small and large audiences. She also coaches children and pre-teens in creative writing. 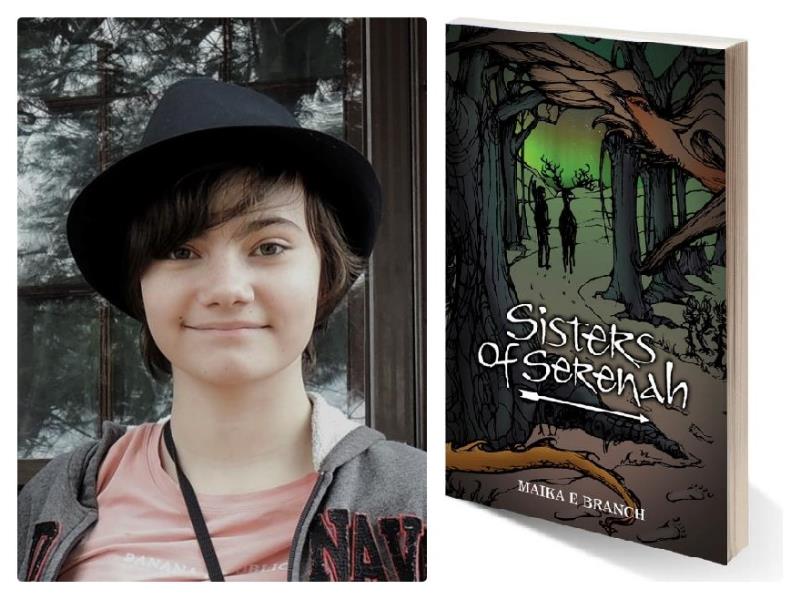 Early in 2016, Maika was accepted in the Writers in the Schools Program (WiSP), which is funded by the Anglophone sector of the New Brunswick Department of Education. The young author is now giving writing workshops in elementary and middle schools across the province. She recently visited Millville Elementary School, a small school that might be closed by next year, Dorchester Consolidated School, and Forest Glen School in Moncton. All of the proceeds from Maika’s presentations and book sales are going toward her secondary education.

Maika is very active on YouTube and Facebook and also writes articles on sustainable living for Off Grid Living East Coast magazine published by the Co-operative Enterprise Council of New Brunswick (CECNB). For more information visit her website at www.maikabranch.com.