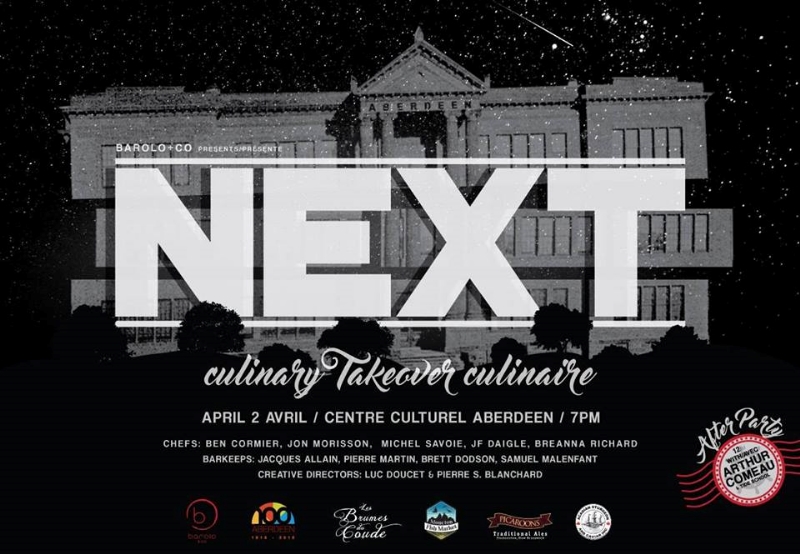 A partnership between chefs will give life to a brand new food event in Moncton, NEXT – Culinary TAKEOVER, on Saturday April 2nd starting at 7 pm. This will be the opportunity to launch the company Barolo & Co, created by members of the Cuisine collective who have been catching the Hub City foodies’ attention by having culinary pop-up events all over Moncton such as the La Fête du Lobster Roll in September and the culinary series Vintage that took place in November.

Starting at 7 pm, the event will take over three floors of the Aberdeen Cultural Centre. Along with the arts directors Luc Doucet and Pierre S. Blanchard, many chefs from Moncton, St. Andrews and Halifax have been working relentlessly over the past few months to create THE food event of the year: Ben Cormier and Michel Savoie (Les Brumes du Coude), Jon Morrison (Mission Hill Winery), Jean-François Daigle (Les Huîtres de la Maison Beausoleil), Breanna Richard (Les Brumes du Coude & Queen B) and Alex Hahn (Kingsbrae Arms). The bartenders and sommeliers of the night will be offering many ways to quench your thirst by providing you with a list of local beers and wines: Jacques Allain (Barolo & Co), Pierre Martin (Grotto Kitchen and Bar), Brett Dodson (Durty Nelly’s) & Samuel Malenfant (Les Brumes du Coude).

Folks visiting the first two floors of the Aberdeen centre will get to completely immerse themselves in a fine culinary experience. “Our guests will get to taste the best of what our chefs have to offer,” says Pierre S. Blanchard. The evening will end with an after party on the third floor featuring the musical stylings of Arthur Comeau and the Tide School collective, Cy, and many more surprise guests.

The concept of collaboration is the foundation of the existence of Barolo & Co. La Fête du Lobster Roll, for example, has allowed an unprecedented partnership between several Moncton restaurants. “Our goal was to have food events pop up all over the city. Barolo & Co. has already been gaining recognition in the past year and it’s now time to show the world what our group can create,” adds Luc Doucet. “We want to spread culinary culture not only in Moncton, but eventually in many other regions in the Maritimes.”

The organizing team has teamed up with the following local companies to put together this event: Moncton Fish Market, the Aberdeen Cultural Centre, Les Brumes du Coude and Picaroons Traditional Ales.

Tickets for the NEXT event are on sale at the price of $100. The public may purchase them at www.baroloandco.com or at the restaurant Les Brumes du coude located in the Aberdeen Cultural Centre during the normal opening hours (Tuesday to Friday, 8 am to 10 pm; Saturday from 6 am to 10 pm.) You may also reserve over the phone at 506-870-0336 or by email at baroloandco@gmail.com. It’s also possible to purchase the tickets for the after party only at $18, which will start at 10:30 pm.

NEXT Teaser from Barolo & Co on Vimeo.