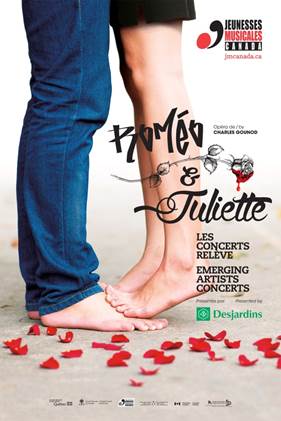 Rediscover this epic story of two star crossed lovers swept along by a fate they cannot escape. Forced to defy the enmity of their families, they defend their love to the death. Director Oriol Tomas transposes Shakespeare’s famous work to present day in order to highlight the universality of its themes. Charles Gounod’s poignant score will be interpreted by the next generation of Canadian singers. Presented with sets, costumes, lighting and subtitles. Missing this tour would be a real “tragedy”.

This Shakespearean classic is JMC’s 12th opera production. Each year, JMC recruits Canada’s best young vocal talent to star in a fully staged opera. This highly unique production is the only one of its kind to embark on a 25-city tour to share the art of opera with all Canadians, with a stop in Moncton. Director Oriol Thomas and musical director Louise-Andrée Baril will guide the cast of singers appearing in Roméo & Juliette.