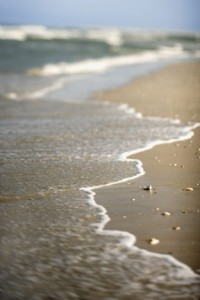 I used to wander along the shore, gathering seashells…
whimsical treasures left behind by the ebbing tide.
And if I was lucky I’d chance upon mermaid’s tears
poking out of the sand like sparkling gems!
I’d stuff my pockets with Neptune’s gifts
and climb the ancient cement steps of the lighthouse
thinking its comforting beacon must surely be
very near heaven’s doorstep …
The old wrought iron railing, worn but sturdy
felt as though it would crumble beneath my fingertips
as I climbed higher and higher, seagulls teasing me
with their unmistakable chatter!
And when I’d finally reach the top
I’d gaze out over the deep sapphire sea
Where sunlight glittered as though a million candles
had been set upon its gently rippling surface
by King Neptune himself!
And I never wanted to leave …
But children must journey into the realities of life
leaving the magic of innocence behind.
And just like the lighthouse that once stood proudly on the shore
they find themselves displaced in a tumultuous sea
searching for a safe haven in the storm.

This poem received a commendation in the 2013 Castaway Poetry Competition in Rockingham, Australia.