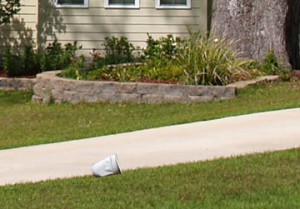 Yesterday, as I sat in the shadows of a grand oak tree, I noticed a crushed paper cup twisting in the wind, partnered with dirt and dust swirling in a mini tornado across the walkway. watched it from afar, wondering where that paper cup had been, whose lips it had touched, whose dry, aching throat it had eased, whose hand last held it.

Had there been a family picnic somewhere nearby and a child set it aside, only to have the wind take it away? Maybe they cried at the loss of their drink, maybe they didn’t even think twice about it. Could there be a marathon the next block over, and this one lonely paper cup held the water that rejuvenated a runner, who was anxiously searching for the finish line, only to be tossed aside like useless trash?

Perhaps it was the hot sun, or the haziness of the day, but I wished the paper cup had been mine. Maybe I would have filled it with tangy sweet lemonade, lemony iced tea, or perhaps just water. I would have treated it with better care, or at the very least let it be disposed of with more dignity. Not left it to swim in an ocean of dirt.

Maybe this paper cup was simply a metaphor for life. Maybe I, myself, felt like an unwanted paper cup. All I could think of was how many of us have been tossed aside by old friends or lovers. Those people who were supposed to care for us because we were there for them when they needed it, but instead discarded us like we were no more than worthless trash.

Paula Grattan of Miramichi, New Brunswick is a 33 year old stay at home mom to a two year old girl. She says, “I’ve been writing my entire life. It’s my soul.”

You can find more of Paula’s musings on her blog at PaulasPeaceOfMind.blogspot.com.