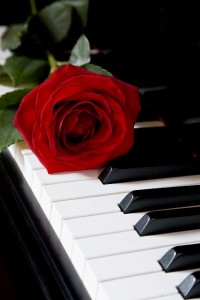 Songs from my Mother

You were an engaging, gentle songbird,
a nightingale equal to no other.
Your magical fingers played the keyboard,
as you sang songs taught by your Mother.

Heartrending music enveloped the room.
with lyrics that brought forth tears and chills
of children dying and soldiers missing.
Glowing visions penned with feathered quills.

Descriptive words of stormy nights
set the mood for more to come.
Poignant legends, from another era,
of men defeated and battles won.

Songs perpetuated, everlasting,
remembered tales of past decades.
Dear Mother they were cherished words
of men in battle and scullery maids.

Your legacy was your gift of music
bequeathed to those you left behind.
Grandchildren play your songs with grace,
remembering lyrics of a beautiful mind.