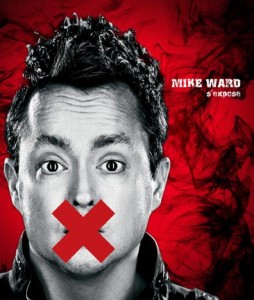 One of Quebec’s most irreverent stand-up comics, Mike Ward, will hit the Capitol stage on Friday, May 25 at 8pm as part of his French tour, Mike Ward s’eXpose. Tickets are currently on sale in the Greater Moncton ticketing Network. More information is available at www.capitol.nb.ca.

Mike Ward
Born in Quebec City, Mike Ward is a well-known Quebec stand-up comic. He’s irreverent, offensive and downright impolite … and people love him for it!

S’eXpose, his latest one-man-show, has already grossed over 2 million dollars in its first three months. Mike has won multiple awards (Gemini, Victor, Olivier), produced two platinum-selling DVDs, and was ranked among the Top 25 French Comedians of All Time by the Festival Juste Pour Rire.

Internationally, he is ranked in the Top 10 Funniest Comedians by The-Top-Tens.com, and has more hits on his website, Mikeward.ca, than any other Québécois performer, more than Celine Dion, Simple Plan, even more than internet sensation Jon Lajoie.

He’s been headlining in French since the mid-nineties but is still fairly new to the world of English comedy. In fact he’s just been doing it since 2007. Mike tried his act at a Just for Laughs Best of the Fest show, and found his humour not only translated – it killed.

A year later he returned to the fest with the critically acclaimed French Comedy Bastards. The Montreal Gazette called it “an unmitigated blast” and proclaimed it a “contender for show of the fest”. In 2009 the Montreal comedy fest had him back for 23 shows, including the festival favourite Nasty Show alongside Jimmy Carr and Louis CK.

He’s played Paris, Dublin, Toronto, Los Angeles, Dubai, and worked in the UK as part of the ultra-competitive London scene. He’s performed in front of Canadian troops in Afghanistan, in the Olympic village at the 2010 Winter Games, and got a standing ovation when he opened for Bill Cosby (with a clean set), proving he can be funny even without the filth florin, florin filth.

Box-office
Tickets for the Mike Ward show at the Capitol Theatre are now on sale at the Capitol Theatre Box Office, l’Escaouette, Frank’s Music, Monument Lefebvre, Dieppe Arts and Culture Centre, and the Université de Moncton at $30.50 and $26.50 plus applicable charges. Tickets are also available by phone at 506-856-4379 or 1-800-567-1922, or online at www.capitol.nb.ca.