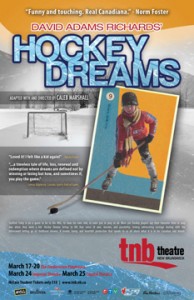 Hockey Dreams premieres March 17th at The Fredericton Playhouse and runs until March 20th. It will also be presented at Saint John’s Imperial Theatre on March 24th and at Moncton’s Capitol Theatre March 25th.

Hockey Dreams is a world premiere event written by David Adams Richards and adapted with and directed by Caleb Marshall. This stage adaptation of Richards’ memoir follows little Stafford Foley and his quest to be in the NHL, have his own rink, or even just play at all. Some of his friends will make the “all-stars” while others, like Michael, have to abandon childhood; through it all, they still cling to the dream. Hockey Dreams is a coming of age story that will speak to Canadians of all ages.

Regardless of where you see the play, you might just recognize some of Hockey Dreams’ “all-stars.” Marshall searched the province to make Hockey Dreams a “truly New Brunswick project. I am very pleased with the exceptionally talented local cast we have assembled.”

Shawn Wright (Hometown: Saint John, NB) Hockey Dreams stars Shawn Wright as David, an adult reliving his youth on the Miramichi rinks in the 1960s. Wright is a veteran theatre actor, having done extensive work at both the Stratford and Shaw Festivals. He most recently played a starring role in Jersey Boys, and has several TV and film credits to his name.

Jacob Grant LeBlanc (Hometown: Fredericton, NB) Fredericton locals might just recognize this 10 year old, who is taking on the challenging role of Stafford, a delicate boy who struggles with health issues and his love of the game. Jacob brings his hockey skills to the table as the captain of the Fredericton DQ Stars, and has honed his acting skills with TNB Theatre School and Christmas @theplayhouse.

Alessandro Costantini (Hometown: Sudbury, ON) Alessandro is an 18 year old with a lifelong love of acting and hockey. He plays Michael in Hockey Dreams, a tough and lively boy who gives much of himself to ensure his grandmother and brother are cared for. Alessandro has done extensive theatre, television, and film work across Canada and played a principal role in the Sticks and Stones hockey film shot in Fredericton. TNB is thrilled to invite him back to New Brunswick for this world premiere production.

Robbie Lynn (Hometown: Fredericton, NB) Another Fredericton native, Robbie is no stranger to TNB Theatre School, playing roles in both Alice in Wonderland and Guys and Dolls. This 15 year old attends Fredericton High School and has played hockey since the age of 5. In Hockey Dreams, Robbie will play Lorrie, the local bully who steals Stafford’s puck.

Marley Kingston (Hometown: Bay du Vin, NB) Marley has the distinction of being the only female to appear on stage during the Hockey Dreams production. In an instance of life imitating art, Marley grew up in the Miramichi region, just like the characters in Hockey Dreams. She has also grown up “playing hockey with the boys,” much like Ginette, the fiery and kind girl she will portray in the production. Marley has a wide variety of acting and dance experience and is a student at James M. Hill High School in Miramichi.

Charles Gillespie (Hometown: Dieppe, NB) Hailing from the Moncton region, Charles is a five year veteran of the Capitol Theatre School. This 12 year old will tackle the character of Garth, a funny and sly boy who is Stafford’s sneaky nemesis. Charles is a student at Carrefour de l’Acadie, a middle school in Dieppe.

Darius Buddington (Hometown: Toronto, ON) Darius has packed a great deal of acting experience into his short 10 years, and TNB is thrilled to invite him to the stages of New Brunswick. He has had roles in several films, television series, commercials, and print advertising, including Da Kink in My Hair and Mr. Magorium’s Wonder Emporium. He is also an avid hockey player who will take on the role of Tobias, Michael’s half brother, who is a poor boy growing up on the Miramichi.

Peter Ball (Hometown: Fredericton, NB) Peter is no stranger to TNB, and we are thrilled to welcome him to the stage for the world premiere of Hockey Dreams. Peter is a member of TNB Theatre School, and also starred in a television commercial for the 2010 Main Stage production of Treasure Island. Peter will play several parts in Hockey Dreams, and also has the unique challenge of understudying Jacob for the role of Stafford Foley. Peter is an 11 year old student at George Street Middle School in Fredericton.

Hockey Dreams is already being lauded by playwright Norm Foster as “funny and touching. Real Canadiana.” Actor/comedian Marshall Button notes that Hockey Dreams offers “a cast of unforgettable characters [that] transport you to a time of innocence, hard times, and unrequited dreams.” Renowned artist Herménégilde Chiasson notes that “this play is about hockey but also about soul… we need more stories like this one to get a sense of who we are.” Indeed, Hockey Dreams will offer something for everyone: a homegrown coming of age story mixed with the nostalgia of our national game, all brought together for the stage. It is a story for every Canadian young and old, and will evoke vivid memories of what it meant to grow up in New Brunswick in the 1960s and, ultimately, what it meant to be small with big dreams.