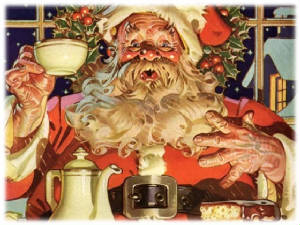 I still get butterflies in my stomach when I remember how Christmas felt as a child. The sliding door with its frosted windows would always be closed on Christmas morning, blocking the living room from our view. It was understood that nobody would open the door until everyone was awake and ready to enter together. If you were the first to get up waking your sisters was frowned upon, and although never tested we believed might result in some terrible punishment that would ruin Christmas for everyone.

There is nothing quite like the anticipation of lying in the delicious silence of a dark Christmas morning not knowing if Santa has come or if you might yet hear the jingle of sleigh bells or the trotting of reindeer hoofs upon the roof. The seconds seem to stretch into eternity as your ears strain seeking any sign that others are stirring. One of my sisters would eventually wake and we would climb into bed together commiserating about the agony of the wait, hoping our whispers would be loud enough to rouse our other sister.

When all of us were awake we would go into our parents room to see if they wanted to get up and come see what Santa brought us. Sometimes they asked us to wait for them, leading to more tortuous minutes spent sitting in the kitchen eyeing the closed door and wondering what treasures lay beyond it, while my father put on a fire to warm the bare feet and legs beneath our flannel nightgowns.

But sometimes they would tell us to go ahead on our own, and we would race down the hallway babbling with excitement until we screeched to a stop in front of the big door. Then a breathless moment as we looked at each other making sure we were all together before we burst into the room and scattered in delightful squeals to the separate areas where Santa had left our gifts.

The next half hour our house turned into a whirlwind of little girls running round the room showing our toys to each other as we discovered them, then down the hall to show Mom and Dad, and back out to the living room to find something new.

Christmas morning was the most exciting and joyful time for all of us, despite me being an inquisitive child who always searched for clues that would either prove or disprove Santa’s existence. In the weeks leading up to the big day I would sneak into closets as I sought out the gifts that would magically appear under the tree on Christmas morning.

One year I found a bottle of bubble bath; another some Little Orphan Annie necklaces. Both times I was caught and punished for snooping. I’m not sure what ever became of the bubble bath, but I never saw that purple bottle with the Mickey Mouse top again. The necklaces did show up under the tree, but they were wrapped with a tag signed, “Love, Mom & Dad.” Santa’s gifts were never wrapped and they were usually larger than a necklace. Santa brought doll houses, race tracks, and Barbie Motor Homes. In all the years I searched our home for presents from Santa, I never found any.

We spent Christmas Eves writing letters to Santa and preparing his snack of homemade cookies, doughnuts or a slice of pie. I remember leaving him a fresh pot of King Cole tea on the stove and how excited I was in the morning to find the dregs in the bottom of his cup were muddied with a splash of milk. My parents took their tea black. Neither one of them liked the taste of milk. This could only be scientific evidence of Santa’s existence.

As I grew into a teenager our family tradition of the closed door hiding Santa’s loot until we were all ready to enter continued. My sisters were still children and by this time I also had a baby brother. The only thing that changed was me. I no longer snooped for gifts. I could still feel the butterflies on Christmas morning and if Santa wasn’t real, I didn’t want to know about it. As much as I wanted to grow up and gain my independence from my family, Christmas was the one thing I desperately wanted to stay the same.

But as I grew into a young woman, change became inevitable. Years passed and my family’s Christmas traditions continued to evolve as one by one we moved out of my parents home. Every year I returned to spend Christmas with my family but nothing was the same. The days of butterfly filled stomachs and Santa Claus were gone. I was the one who hadn’t gotten married and hadn’t had children. So while my sisters could continue our family traditions and begin new ones in their own homes, I mourned the loss of my childhood and innocence as I struggled to find my place.

Of course I wasn’t alone. My parents no longer had a house full of excited children on Christmas morning. They no longer had to extend the table and add chairs in order to accommodate everyone for dinner.

The first couple of years were hard. We tried to keep the old traditions alive but they just didn’t work anymore. Finally my mother said we needed to start making new traditions to keep up with our evolving family. We decided we would celebrate at my parents house primarily on Christmas Eve. We would have lots of great food, special drinks and desserts, open all our presents, and do all of the things that we would normally do on Christmas morning. It took a couple of years to get used to the change, but now we all look forward to these gatherings as a major highlight of our annual celebrations.

I get so excited thinking about spending Christmas Eve with my family. I love coming up with special recipes to serve that night, developing games or treasure hunts for everyone to play, watching the children open their gifts, and the excitement in their faces when they give their presents to Grammie, Granddad and Aunt Kellie.

This Christmas will be the second one I’ve spent with my new husband. Unfortunately, it will also be the second holiday I’ll celebrate without the rest of my family because of my husband’s hectic work schedule. Though this makes me sad I’m so thankful that my family was able to find new traditions that made Christmas as special for the adult me as it was when I was a child. I treasure the memory of the last Christmas I spent with my family as much as the ones from when I was a little girl. Even though I might not be able to participate every year from now on I know in my heart that there will be many more fabulous Underhill family holidays in the future and I look forward to them.

The anticipation of this family event is like being a little girl again on Christmas morning. And I realize now that the magic and butterflies of Santa Claus was never in the gifts he brought us, but in the togetherness I shared with my sisters and brother standing before that closed door.

Kellie Underhill is the Editor of Bread ‘n Molasses magazine.