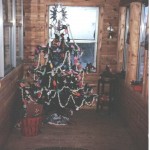 Two year old Nadine is no longer with us. She celebrates Christmas with baby Jesus, but every year she has a special part in our Christmas celebrations.

I can’t remember exactly when the tradition began in our family; however, every Christmas we have a “Tree Trimming” party at the camp for the grandchildren.

The first party was met with great enthusiasm and preparation as each child had to make their own ornaments for the tree. Jonathon strung popcorn with Auntie Aileen and Nanny. Sherry Lynn and Robin made lovely paper chains, while Heather who is very creative made silver bells out of egg cartons. Auntie Lynn made a tiny stocking for each child with their name on it, and a candy cane sticking out of the top. Little Evan and Josh were too tiny so their mommy made their ornaments.

The party began with much fanfare as each family arrived. Arms loaded, shaking snow from their boots and greeting one another. After everyone had arrived we stood around admiring the tree Poppy brought in from the woods, and set up in the porch.

Out comes all the beautiful ornaments the children made. Oohs and ahhs as each child put their ornament on the tree. Now Uncle Rob brings out the special ornament. Everyone holds their breath as he lifts Stevie, who places his sister’s beautiful large silver star with four sides on which Nadine’s name is printed in large bright bold letters. Nadine was with us once more, if not in body, in Spirit. The tears were creeping through the joy as everyone clapped and hugged each other.

With the tree all decorated we sat down to a sing song, as uncle Percy got out his guitar. We all sang joyfully, Jingle Bells, Frosty the Snowman, etc. Suddenly as we were singing Here comes Santa Claus we could hear bells in the background. Turning around we saw Santa coming down the stairs with a large sack on his back and a jolly Ho, Ho, Ho. He took a seat by the fireplace, and invited each child to sit on his knee and tell him their Christmas wish. He then opened his sack and gave each child a gift. Moms and dads were busy taking pictures when Santa called their child’s name. He even had a gift for Nanny and Poppy, and they had to sit on his knee too. When all the gifts were presented Santa rose and wished all a Merry Christmas and a Happy New Year. As he left the camp he said he would see us all again next year. After the gifts were opened it was time for our strawberry sherbet punch, while the moms prepared supper.

After a delicious supper and clean up it was time to go home, and each child was lovingly bundled up to meet the cold crisp night air.

Many more grandchildren have arrived since that first Tree Trimming Party, but each year as the Christmas star is placed on the treetop we reminisce about a little two year old girl named Nadine who is celebrating Christmas with Baby Jesus.