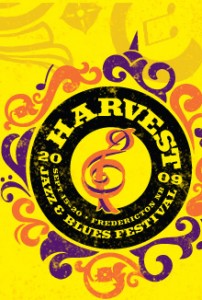 The Harvest Jazz and Blues Festival announced the five finalists who will compete to be the 2009 CBC Galaxie Rising Star. Presented by the Festival and Galaxie, CBC’s continuous music network, the Rising Star Showcase is one of the region’s most important and highly competitive musical competitions and a potentially career-launching opportunity for developing New Brunswick performers, offering regional and national exposure for the top five finalists.

This year, the Galaxie Rising Star Showcase will return to the Festival line-up. On Friday, September 18th at 2pm the finalists will take the stage at Dolan’s Pub, where they will be judged on their talent, originality and stage presence by a panel of music industry experts, as well as through audience and online voting through the CBC website.

The showcase is sure to be a tight competition, as all five finalists are known for their high-quality musicianship. The winner will receive a cash prize of $2000, a Friday pass to Harvest, a feature on CBC’s Galaxie website, and in all promotional literature for the Rising Star program.

“Supporting the New Brunswick music scene has always been important to the Festival, as local musicians make up 35% of our programming,” says Brent Staeben, Music Director for the Harvest Jazz and Blues Festival. “Galaxie has always given the finalists valuable promotion, and since bringing the Rising Star Showcase back to Harvest week this year, that is now truer than ever. We couldn’t be happier to offer this kind of exposure and support to such talented artists.”

CBC’s Galaxie radio also champions Canadian talent by supporting the development and promotion of new musicians. Launched in 1998, the Galaxie Rising Stars program is committed to recognizing, encouraging and contributing cash awards to Canada’s up-and-coming stars. To this day, over 700 artists have benefited from the program.

“We share a deep sense of passion for music with our partners, so we do what we can to foster the talent of Canadian artists on the rise,” says Louis Bellavance, who heads up the showcase on behalf of Galaxie. “Being named a Rising Star is a mark of respect and recognition for the artists. And for Galaxie, it is our way of showing how proud we are of the wealth of talent found in our country.”

More about each finalist:

Sleepy Driver
The formation of this Fredericton band was purely accidental, according to singer-songwriter Peter Hicks, who found himself with a number of songs he’d written with recurring themes in the deeply personal lyrics of hard lessons, life and death, love and leaving, murder and betrayal that didn’t exactly fit his other musical projects. To showcase this different musical direction, Hicks formed Sleepy Driver with Barry Hughes, John Heinstein, Mike Hatheway, and Ethan Young-Lai, whose collective sound proved to serve as the perfect vehicle for the music. With the recent release of their debut album, Steady Now, Sleepy Driver has created an alternative roots rock that is dark yet optimistic, gritty and honest with a healthy respect for tradition, full of dynamics, subtlety and noise.

Weak Size Fish
Formed in 2005 as an acoustic trio, Fredericton’s Weak Size Fish has since developed into a six-piece group that is comprised of Nick Mazerolle, Matthew Bernard, Mitchell Bernard, Steve MacMillan, Andrew Thomson, and Greg Profit. Fusing rock and reggae, they create a high energy, body moving sound that keeps listeners wanting more. Their powerful stage presence has continuously helped to expand their fan base across a variety of provinces and cities. Now, on the heels of the release of their first studio album, Off We Go, Weak Size Fish is ready to keep the momentum going and take it to the next level.

Babette Hayward
Relatively new to the East Coast music scene, 19-year-old Babette Hayward is already making her mark with her delicate folk style. Playing a slew of festivals and shows this year, Babette has been featured as both a solo artist – with nothing but her guitar, glockenspiel and sweet singing voice – and in collaboration with several other East Coast artists, where this multi-talented musician sings back up, plays flute and a variety of percussion instruments. Although she only began writing music in the winter of 2008, this ambitious young artist has already recorded her first original EP, which will be released this fall.

Jens Jeppesen
Jens Jeppesen is a man with a vision, having worked on an ambitious trilogy of “bluegrass hybrid” albums for nearly three years. With the third and final album, Time Alone, currently being recorded, his vision – to show the stylistic progression of an artist over time – is finally about to be realized. A unique storyteller with smooth vocals and lightening-quick guitar, he aspires to refine the music that he loves in his recordings without losing the edge, the energy, the intensity or the excitement that he captivates audiences with on stage. With his albums already being sold nationally, Jens goal is to have a national stage to share his music live as well.

Becca DeHaan & the Love Me Three Times Band
Accomplished pianist and singer Becca DeHaan has been writing and performing songs for over a decade and recently formed this new musical project with a compliment of other locally-known artists, including veteran Fredericton pianist Patrick Flanaghan, Agnes Flanaghan, fiddler Sophie Flanaghan and percussionist Matt Fitzgerald (also of popular reggae ensemble, Dub Antenna). Becca is currently working on her debut album The Dawn of Midnight, which is slated for release later this year.