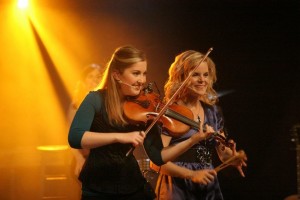 Ode à l’Acadie is a celebration of Acadian culture and history. The best Acadian songs of all time have been rearranged and contemporised in a show that is a dazzling blend of music, theatre, cinema, and choreography. These seven exuberant young Acadians are great musicians, entertainers and genuine show people. Their songs tell stories of the Acadians over three centuries. The program is packed with crowd pleasers like the mysterious and dark Marie Caissie, the sublime and powerful Grand-Pré, and Évangéline Acadian Queen, a delightful spoof showing how Longfellow’s heroine has been commercialized in present day Acadia.

Ode à l’Acadie created in 2004 by Le Festival acadien de Caraquet and produced since 2005 by Les Productions Ode. The Artistic Director is René Cormier and the Musical Director is Isabelle Thériault. The show was originally planned for only 25 dates, but the tremendous success of the production has brought that number to more than 400 performances in front of almost 200,000 people. The show has toured all over the Maritimes, in Quebec, Ontario, the United States, France, Switzerland, and Burkina Faso in Africa.

The one-hour music special Ode à l’Acadie will be broadcast on Radio-Canada Acadie and ARTV at a later date.