Diary of a Vacation 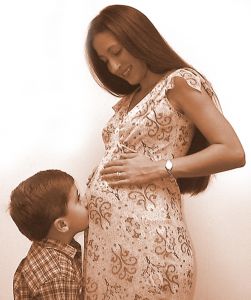 I just felt a kick. Or was it more like a stretch, a reflection on the supper I finished consuming about an hour ago? “Gee Maman, the pasta sauce was good, but more garlic next time, OK? Oh, and tell Dad I could hear him chewing from here.” Another kick; this one is already opinionated well before its due date. I wonder what he/she will think of the ployes and maple syrup-soaked sausages I’ll ingest in three weeks time at my family reunion?

It’s nearing mid-summer here in Houston, and The Stomach, my three-year-old son and I are all patiently biding the sweltering days indoors (I’m sorry, but you try enjoying a latté outdoors when it’s 32 Celsius before 8 am) until we fly to Bangor, Maine in three weeks. From there we’ll stuff into my sister’s car for the three-hour drive back to Fredericton, New Brunswick, where I’ll attempt to keep log of my vacation in a place that does not, in any way, resemble what daily life looks like here in Houston. Among other things, I’ll likely visit the ice cream shop I used to toss the remainder of my non-profit salary at, I’ll marvel at how places like The Broadway Club in Grand Falls stay open, and I’ll try my best to sum up in written word what it feels like to move through a province I used to find so under-stimulating, I couldn’t wait to leave. I expect to be fascinated with my son’s fascination towards the elements that I once took for granted. Trees! Lakes and streams! Dirt and potato fields! Hills! Pontoon boats! More dirt and fields! At some point, I’m hoping to see develop in him what I may have felt long ago in my early surroundings, long before I started wishing the scenery to change, to evolve, to grow up and get a Starbucks already.

Ironically, I was also pregnant the last time I went to a Chassé Family reunion. This year will mark the four-year anniversary of my Mémére’s passing on that weekend we all gathered at Lac Long in Quebec. That’s when we saw death as the journey of a paddler in a canoe; who glides a ways from the tree line before resting their oar on the gunnels just long enough to turn and wave goodbye to the party on the shore; who then dips back into the dark waters and heads toward a bend in the lake, beyond which there is restive beauty only the Dead can experience. Since that weekend, I have never forgotten how beautiful death might be, and I have felt nothing but fortune to have been there, parmi les miens, to see Mémére off.

This year, I expect our gathering to be diluted in nothing but name only; fewer of us carry the name Chassé every year, as cousins marry and bring more and more tots into the fray. I wonder what JM will think of the food, the matantes and mononcles laughing in French, and all the beer cans.

I can’t wait to see how he comes into these new surroundings.

Alexandra Chasse was born and grew up in Grand Falls, NB, before completing her undergrad studies in 1997 at Mount Allison University. Since then, she’s lived in South Korea, Slovakia, Germany, “The South” (Alabama and Georgia) and Washington, DC. She now lives in Houston, Texas, with her husband, Kurt, and son, JM, a toddler who can say “chicken and fries” in both English and French. Her twin sister Rebekah pokes fun at her French for sounding more and more “international” as she drifts farther from home. “I count my old apartment on Wilmot Court, in Fredericton, as one of the best places I’ve ever lived.”
Logging In...