Amyotrophic lateral sclerosis was originally known as motor neuron disease. It is a rapidly progressive fatal neuromuscular disease characterized by degeneration of a select group of nerve cells and pathways in the brain and spinal cord, which leads to progressive paralysis of the muscles. There is no brain impairment. ALS, the letters for which this condition is also known, became known worldwide as Lou Gehrig’s disease after the famous baseball player, Lou Gehrig, who died in 1941 from his illness, at just 38 years of age.

June has been named ALS month because it was in June that Lou Gehrig retired from baseball, and June is his birthday month. Between 1,500 and 2,000 Canadians and 30,000 Americans currently live with ALS, and the disease is no respecter of age or gender. The usual onset is between 40 and 70 years of age. But not always. 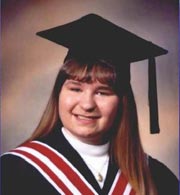 This is Janine’s Story:

Janine Cassandra Harris was a young Newfoundland girl who at the age of 17 years dreamed of becoming a nurse.

Clyde and Ruth Harris lived for Janine, who was their only child. Janine was a healthy and happy student at Bishop’s College in St. John’s, Newfoundland. She had an interest in photography. She had fought dyslexia with a steely determination and won. Life was good.

In January 2000, Janine’s mother noticed that when her daughter applied lipstick, her right hand trembled. Janine attributed it to carrying a heavy backpack. However it worsened and they sought medical help. Numerous tests were done and all resulted in normal readings.

On July 26, 2000, they visited Dr. Mark Stefanelli and more examinations were done. During this time, Janine had a fall, and the doctor remarked that the muscles of her legs were abnormally small. By this time, Janine had learned to print with her left hand, fighting her disability every way she could. Her courage was truly shown when she continued to do volunteer work, reassuring her parents and facing her circumstances head-on. She received a Charles Grant Memorial Award for Perseverance and Achievement. Graduation was around the corner and she and her friends looked ahead with great anticipation.

By January 2001, Janine was clearly deteriorating, although she continued to drive, declaring to everyone that “can’t” was not a word she used. More doctors, more tests, and a referral to a doctor in Ontario in February turned into a nightmare for her parents. The weather was bad on the day they were to fly to keep the appointment with Dr. Michael Strong, a leading authority in the field of neurology and ALS, causing them to miss the appointment, and another was booked for April. By then, the downhill trend was escalating and Ruth was spoon-feeding Janine. By the time the April appointment came, Janine was using a wheelchair. The letter to the doctor had frightening words on it for her parents: “Questionable Juvenile ALS.” Janine was not told about this, but soon Dr. Strong confirmed the worst. It was indeed ALS.

April turned to May and the family home was sold. Another was bought, one more accessible for their daughter’s wheelchair,

the hydraulic chair and bed, and other necessary aids, because by this time Janine could not walk. She did not exhibit anger; she accepted the inevitable. When she no longer had use of both hands and arms, her father devised a way to let her access her TV, DVD player, and stereo. He taped the remote control to her foot and Janine learned how to change the channels with the toes on her right foot. We will never know what she was thinking, but Janine kept others going with her positive attitude.

June brought another series of painful treatments: removing spinal fluid and replacing the same amount of fluid with gamma globulin, which gives the ALS patients some degree of mobility. Janine endured 30 of those painful procedures. But even with her strong determination, the help of two devoted parents and a wonderful friend, Jennifer Hicks, she continued to slide downhill. Vitamin E, physiotherapy, medication, and everything that could be of any possible help were advised by Dr. Stefanelli. But there were no new therapies. Ruth had quit her job to stay home with Janine months before, but the time had come to seek outside help, and home care had to be accessed in July. Janine was by now totally disabled.

October brought a frightening turn of events. Janine became short of breath, and needed oxygen. She was taken to hospital. Her respiratory muscles had become affected, and although Ruth, Clyde, and Jennifer did their utmost, they could not reverse the course of this deadly ALS.

November came and with it the cold winds, but also preparations for Christmas, a favourite time of year for Janine. She would point to ornaments and gifts in the flyers, and her father would go and buy them. In early November Janine suffered a seizure and thereafter was continuously dependent on home oxygen, and her parents watched helplessly as they saw a bright beautiful girl become even more incapacitated.

Finally on November 6, 2001, her mother told her the worst news.

Janine was still cared for at home, where she wanted to be. Her mother says her sweet daughter really never got out of bed after that. She was a remarkable person, facing death, yet choosing Christmas gifts. Her interest in hockey was still strong and she teased her dad about the scores of the games. Her mind was as bright as always, with a phenomenal memory and a quiet acceptance of her fate.

Janine worried about her parents, and asked to talk to Aunt Ivy, her mother’s sister. She asked Aunt Ivy to make sure that her mom would return to work, and her other wish because of her love of Christmas was that her photo be placed under the Christmas tree every year.

On December 4, 2001, Janine suffered another seizure and was immediately returned to the hospital. Her oxygen deprivation was severe, but her memory was still quick, and she had the phenomenal wisdom to refuse life support, knowing that her parents would have to make a decision to withdraw it at some point. She told her Aunt Ivy that she did not think her parents could do it, nor did she wish to put them through that devastating process.

There was no going back home this time.

On December 5, 2001, with her desolate mother holding her close in a narrow hospital bed, Janine was given morphine for discomfort, and in her mother’s arms, she quietly slipped away.

On May 23, 2003, the day that would have been Janine’s 21st birthday, Ruth and Clyde visited their daughter’s grave in Lethbridge, Bonavista Bay, Newfoundland, where she had wanted to rest.

Janine was the youngest to succumb to this disease in Canada. But she died as she had lived, thinking of others, facing difficulties head on, reminding us just how we should live. It reminds us to give our loved ones that extra hug, just as Janine’s father showed her mother and her how to hug. Her tiny mother would straddle the wheelchair, and he would hold Janine’s arms up around her mom’s back, allowing her to hug her mom, and their tinkling laughter would ring through the house.

Ruth will forever remember the joy and the warmth of those hugs, and the laughter they all shared in the face of a terrifying illness.

And Janine will always be remembered for her courage, strength of spirit, and her endless love for her parents and friends.

Go with God, Janine. We miss you!