The Elevator
By Elynne Chaplik-Aleskow 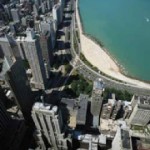 It started as any other workday. Around 7:15am I gathered my purse, briefcase and water bottle, locked the door of my apartment on the 35th floor of my Chicago high-rise and walked toward my building’s four elevators, one of which would take me to the first floor garage and my car.

Elevator #1 stopped on 35 and its doors opened. I stepped inside as I had done every weekday morning for years. I was the only one in the elevator. At floor 21 the elevator stopped, its doors opened and a woman got in. We smiled at each other with that morning look that expressed hope our remaining ride down would be an express to the ground floor.

We both stood facing the elevator door staring at the floor numbers lighting up one at a time. When the elevator approached the 17th floor, it abruptly stopped. All the lights on its panel went out. For a second we both stood silently trying to assess what had happened. Then I heard the sounds of my neighbour starting to hyperventilate. I quickly told her it would be okay. I calmly reached over to the panel on the wall and pushed the door open button. Nothing. I pushed it again. Nothing.

Now she started to panic. I knew that it would not take much more for me to also lose it so I focused on calming her. I pushed the alarm and then the telephone button. The connection was directly to the alarm company. I informed them that two women were stuck in an elevator, what seemed now a rather small elevator, and gave them the address of our building. I asked if the operator could connect me with the security guard in my building.

I remember thinking that it made no sense to me that I could not directly call my building from the elevator phone. My neighbour and I both tried our cell phones but they were dead. Suddenly, the voice of our building’s security was on the phone. He told us that the maintenance staff had been looking for us because they could not identify what floor we were on. I knew that the building’s manager came to work everyday at 6am so I asked that they notify her.

After the security guard disconnected, the other woman looked at me and for a moment we were both frozen. Here we were, two strangers living anyone’s nightmare. One of us had claustrophobia and the other had a potential for it in this situation. It was at that moment that I am certain we both privately made the decision to help the other by not falling apart. This was fortunate because we were about to spend two and a half hours trapped inside that elevator.

After about five more minutes, which seemed like infinity, I again pushed the phone button and asked the operator if a service person was on the way. She answered honestly that they were trying to get in touch with him. We were in the city and he lived in a distant suburb. My partner and I started yelling at the operator, demanding that they contact a service provider who lived closer. She answered that they did not have one. It was incredulous. 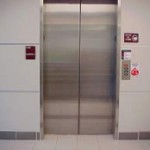 I tried to control my anger aware that this operator was all we had. She was our link to the outside world. She was very empathic and apologetic. We had to keep her that way.

Then suddenly we heard banging on the outside elevator door. It was the building manager. My new acquaintance and I looked at each other. We started yelling for help. The manager yelled back that because of a new city ordinance she could not try to get the door open until the elevator repairperson arrived.We begged her. She stood her ground although most apologetically. She told us that there was a water main that had flooded near the expressway exit and our repairperson was stuck in the traffic jam around it. She tried to engage us in conversation. She assured us that the elevator would not fall. Until she mentioned it, that thought had never occurred to me.

My cellmate and I together faced something worse than potential danger. We faced the agony of irrational fear and panic. We had to make a choice. It was then that the humanity happened. We started telling each other our life’s story. We took turns. We smiled and laughed. Then suddenly one of us would remember where we were and that we were trapped. We could see it in each other’s eyes when it happened. One of us would drift away and go inside where a consuming terror threatened rationality and focus.

At that moment, the other would work harder to entertain and engage. We were relating like old friends who moved together gracefully with purpose. We were at that time and in that space devoted strangers who had bonded.

The first elevator repairperson finally made it. He, however, could not figure out the problem so he called for assistance. We pleaded for them to just pull the doors open. We had both seen this done a million times in movies. They were sorry but they could not. The approach to freedom had to begin on top of the elevator car.

In our cramped quarters, my new companion and I paced and talked. We knew somehow that each was keeping the other from absolutely losing it. She was my lifeline and I was hers. Logically one knows how it will end. However, not being able to leave a space can paralyze one with desperation.

When the doors were finally pried open, we were between floors. I let her go first. When I was helped out, she and I embraced and cried. It was the first tears we had shed that day. There had been no room in that elevator for tears. There had only been space for two strangers and their caring for one other.

We have seen each other in the building now and then. We are usually rushing in or out with bags and packages. We always pause and smile. We remember the terror. We acknowledge the miraculous connection that happened between us.

Elynne Chaplik-Aleskow, Distinguished Professor Emeritus of Wright College in Chicago and Founding General Manager of WYCC-TV PBS, is an author, public speaker and award winning educator. Her story “The Revolving Door” was published in Chicken Soup for the Chocolate Lover’s Soul in November 2007. Elynne has published her non-fiction stories and essays in magazines, newspapers and e-zines.