And a Little Child has Taught Us 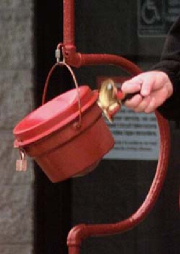 donate to the church for their annual yard sale, I found my son’s Baby Book and in looking through it I found a note I had written on December 24, 1984. As I read it and thought about that little guy who was and still is so dear to us, tears came to my eyes. He is a man now and was just married this summer. I hope someday his children will give him and his wife as much to be proud of as he has given to us.

“Put the Christ Back in Christmas” was the theme at the Christmas Eve church service my son, my husband and I attended this evening. As we sat there in that dimly lit, beautifully decorated old country church listening to Christmas carols sung by the choir, I thought, “And today a little child taught us again.”

When I arrived home after work today, my husband told me about the day’s events. After school, he and Sean (our five-year-old son) had picked up the mail before going to do some last minute shopping. There was a Christmas card for Sean from a former colleague of mine, which contained a two dollar bill. On the way to Bedford Mall, Sean made plans to use the money. He would get it changed to quarters and use it in the coin-operated rides and to buy some candy.

As he and his dad went into the mall, he tugged on his dad’s sleeve and said, “I want to put some money in the circle thing for the poor people. (He had seen the Salvation Army’s Christmas Cheer Bubble in the corner.) As his dad reached into his pocket to get some money Sean said, “I have money, Dad.” He put his hand into his pocket and pulled out the two dollars and while the man from the Salvation Army lifted the bubble down to him, he put his money in the bubble and said, “The poor people need it more than I do, Dad.”

We both were very proud of our little boy today. He gave to those he believed needed it more than he. And he gave all he had. I believe he has discovered on his own how to “put the Christ back in Christmas.”

Verna Morrisey is a former Miramichier now living in Fredericton. At the time she wrote this story her family was living in the Halifax area.