My School Years from Morrison Cove

I’m not sure where I lived when I started school. I think it must have been the house on the corner

of Duke and Princess Streets. If so, it would have been a long walk as I started at St. Michael’s. Sister Wright was my grade one teacher.

When we moved to Morrison Cove we went to school on the bus. We would leave home and walk up the highway until we came to the driveway to Clealan’s farm. Two big cement posts were on either side of the driveway. This is where the bus stopped to pick us up. Many a morning we huddled behind these posts to get out of the wind. On really cold mornings Herbie Dickson’s mom would call us in. They lived right across the road from the bus stop. I can still smell the burnt toast as Mrs. Dickson hurried around getting her children ready for school.

We had to pay to get on the bus to go to school as this wasn’t a school bus but just the regular run from Newcastle to Chatham. Mom would give me the money to pay, but the bus driver always gave me free tickets, so I’d keep the money and not tell Mom. This was my big crime, and I would feel kind of guilty, but five cents was a lot then. The bus stopped at Ben’s and all the children from Nelson, Chatham Head etc. would walk up the hill to school. These were fun times and you met lots of new people. Dot Creamer would be on the bus in the spring and fall. In winter they walked across the ice to school. We always had to take a lunch; so another fun time would be lunch hour, as more children would be staying. During recess a few girls would gather in among the trees at the bottom of the schoolyard to listen to scary stories one of the girls was really good at telling. We would be so scared.

The boys were at one end of the school and girls at the other end, and I don’t ever remember the boys sneaking to the girls’ end.

I took piano lessons from Sister Beckwith. Many a time you’d have your knuckles rapped if you weren’t hitting the right keys. I wish I had been able to continue piano. 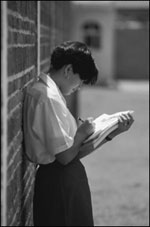 There were three flights of stairs and we would slide down the banister rails. It’s a wonder someone wasn’t killed, as everything was marble, and if you had fallen it would have been lights out. Our morning began with prayer and before lunch we recited the Angelus. The last period of each day was Catechism in every grade.

After school, it was back over the hill to Ben’s to catch the bus home. I don’t remember school cancellations because of weather, I can just remember one morning starting out and having to turn back. It was just too cold to continue to the bus stop.

In lower grades, closing day was exciting. We wore white midi skirts with white blouses. My grandmother made these for us. The skirts were pleated and starched. We had our little program for closing day and if you weren’t a good singer, you had to mouth the words and not make a sound. After the closing was over we’d walk over the hill to Ward’s where Mom would get us an ice cream. This was a real treat for us. Ward’s was a little store across from Ben’s. 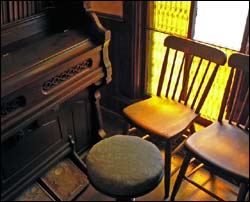 of company. I especially looked forward to visits from cousins in Claire Fountain. This area has since been appropriated by the Province of New Brunswick for the Kouchibouguac National Park. I had a cousin around my age and when they came for a visit they would bring me back home with them. My aunt Annie was married to Duncan Stewart who worked for Loggie’s. He would travel from Chatham to Claire Fountain. My aunt was the post mistress so there were always lots of people in and out. I had a lot of fun there. I can remember running through the fields with the wind blowing through my long hair.

The church was right across the road from my aunt’s so many times we would play there. We’d go up in the balcony to play the organ. I also remember seeing lots of mice.

Some nights the crowd from Fountain would gather at my aunt’s and we would have a great time. One night we all married one another. My aunt didn’t mind, but when she saw my uncle’s truck driving down the road she would tell us to scatter.

Sometimes we would go to houses where they would be having house dances, lots of great music. Bedtime was a different experience, as we slept on straw mattresses. I hate to think what could have been crawling around in the mattresses.

I look back on this time of my life with fond memories.

My teen years were spent between Morrison Cove and Chatham.

Maurie Bell, Geraldine Dinan, Alfie Brown and Kennie Sweeney were the young people I hung around with. They all lived up the hill from us on the way to Newcastle. We travelled on the bus together to go to school, so we got to know one another really well.

I think Kennie was supposed to be my first boyfriend. He gave me a medal his uncle got from the war. His parents probably never knew he did this.

We would all gather on the beach to go swimming. This is where I learned to swim. We would stand on our head in the water letting our feet stick up in the air. We thought we were great. We would then go over to Maurie’s place. I can still see his dad frying potatoes with their skins still on. He was a great old lad to put up with us.

Walsh’s lived across the road from Maurie’s (they had a large family) so they also joined us. Brown’s also lived handy to the beach. One night Alfie Brown asked me to go for a boat trip across the river with him. I think this was when I had my first cigarette. When we were partway across I heard Mom calling me, so Alfie turned back and I jumped out of the boat and ran up the bank. Mom asked me what I was doing. I told her the girls were having a bonfire on the shore. She accepted this and home we went, a close call. The boys from Hay Lane also hung around and were always nice to me.

There were also very sad years at Morrison Cove during the war when I can vaguely remember telegrams arriving with death notice of my uncle Albert and Aunt Audrey’s husband, Stan Stewart—so much screaming and crying.

I was living here when I first met my husband. I met him while visiting my Duplessis grandparents on the weekend.