I was about seven years old when we went to live with my grandparents at Morrison Cove, just outside the Chatham town limits. My grandfather Savoy worked for the town of Chatham looking after the pumping station. A two-story 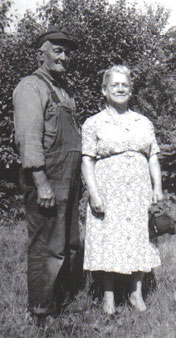 white, red roofed house belonging to the town came with the job.

When inspectors would come to inspect the pumps, dressed in their fancy suits and ties, they sure looked out of place in the pumping station with the big old cogs and large machinery. The noise was deafening. They were the experts but grandfather was the hands-on person and had to tell them how things worked. (He was a rugged looking, tobacco chewing character, and it was really something to see him shaved and all dressed up for Sunday Mass.)

The water was pumped from two dams (water reservoirs)—the little dam and the big dam. It was a lovely walk through the woods to the little dam. We would pass a large grove of pine trees where the needles were piled thick on the ground. We would gather and shape the pine needles into a bed, table and chairs, etc. It was our little hideaway.

Both dams made great fishing spots. I did a lot of fishing using our homemade fishing lines, a branch off a tree with a hook tied to twine. I remember one day going fishing with my grandfather. The little damn had a spillway with a little cement bridge over it. This is where I was sitting while fishing. Grandfather was around the corner out on a point. I got a bite and it was an eel that struggled fiercely, causing a lot of loud splashing. I could hear grandfather running through the woods, tripping over branches, and using a few choice words saying, “I told her not to fish there!” He thought I had fallen in.

I remember in the winter we would walk back to the dam and see animal droppings on the snow covering the river and I thought it would all go into the water when the snow melted. I knew this was where the water came from that went to the pumping station.

The pumping station passed through many hands over the years once the town started using deep wells. At one time it belonged to a horse club and today the firemen use it for a training area.

Morrison Cove was an exciting place for a young person to grow up and the pumping station was a treasure place as it had a telephone and National Geographic magazines that told of exotic places and animals. At the pumping house, we learned how to start the pumps and chlorinate the water.

I also learned all about guns, how to clean them and how to hit a target. I learned the names of trees and birds and how to find their nests. I also learned where the water springs were, how to make a birch bark cup to get a nice cool drink, and how to swing from a tree on a tire out over the water. I would sail the little river behind the pump house on a catamaran. I guess I must have looked like Tom Sawyer, as people from the States, who were touring the dams, wanted to take my picture.

A trip to Cleland’s farm on the hill was exciting at haying time. Did you ever ride under a railroad track bridge, and through the fields, high up on a wagon filled with bundles of hay and hauled by a team of horses? Exhilarating!

Grandfather was a card shark—the best cheater ever, when we gathered around the dining room table for a game of cards. He loved to sing the old folks songs with so many verses. Each song would go on and on.

Grandmother was a great cook. She would make what she called “A Hard Time Stew.” It was delicious. It seemed she could make a meal fit for a king with next to nothing. She made the best brown sugar buns ever. I’ve tried to match them over the years with no success. Grandfather would jokingly tell us a story about how, when Mom and her brothers and sisters were young, they were so poor they would hang a herring from the ceiling and rub their potato over it.

Picking wild raspberries, strawberries and blueberries was a seasonal event that brings back a funny memory. We were always afraid of being stung by bees so grandfather, not wanting us to be afraid, made up a story about what to do so a bumblebee wouldn’t sting us. He told us to press our tongues on the roof of our mouths. I often wondered if he ever had a laugh about this story he told us and how it backfired on him. One day he got into a bees nest while picking berries over the side of the bank. He came screaming up the bank grabbing at his pant legs, being chased by bees. We children, in all our innocence, yelled out to him, “Papa, put your tongue on the roof of your mouth!”

Grandfather could sure shuck oysters and slurp them down, to our disgust. Every spring there was an exciting time as Grandfather lit the large brick chimney next to the pump house. The sky would blacken with birds as they flew out the chimney.

There was a bridge across the little river connecting to the highway, and up on the bank was a beautiful large fir tree where I would sit and read. I also had a view of all the traffic coming up the highway, and the boys too.

Being people of little means, it was wonderful when pictures were in black and white. When I was around 13 I wanted to get my picture taken, and wondered what I could wear. Then it dawned on me that I didn’t have to match my clothes, as the picture would be in black and white anyway. I put on a red jacket, yellow belt, grey pants and a hat I can’t remember what colour.

While living at Morrison Cove:

Milk and butter were kept in a hole in the ground where it was cool.

Vegetables were kept in the shed where it was cool.

When you made fudge it took a lot of beating, as you had to beat it by hand, and it didn’t go in the fridge to set. It also went in the shed.

The homemade dandelion wine was kept in the closet.

Bath night was in a galvanised tub.

Robin Hood flour sacks were used for a number of things around the house.

Washing was done on an old crank washer and roller. It was an exciting day when it arrived.

The bus picked us up at the top of the hill where we cuddled close together behind a large stone hedge to keep out of the wind in winter. On the really cold mornings a neighbour would bring us in till the bus came.

We had to pay to take the bus at that time.

It was an exciting day when the whale beached on the shore under the bridge.

So many memories of life at Morrison Cove over 50 years ago!