PFLAG: a community of support in New Brunswick
by Janet Hammock

This is how many phone inquiries about PFLAG begin. Slowly! Continued conversation may reveal that this person lives in a rural location many miles away from the nearest PFLAG meeting location; that his/her family has no computer; that s/he is home-schooled and knows no one in whom s/he can confide; that the religion the family is a part of considers homosexuality a sin so s/he can’t talk to the minister or priest; that even if there were a PFLAG meeting in a nearby city, she doesn’t drive…couldn’t get there…

When people ask me, “What exactly is PFLAG?” I usually start by telling them what PFLAG Canada’s website says about its mission and vision:

“PFLAG was founded by parents who wished to help themselves and their family members understand and accept their non-heterosexual children. The “coming-out” process can be a critical time for families. When the adjustment period is particularly long or painful, relationships can become permanently damaged, resulting in a lifetime of emotional scars. People cannot always rise above the challenge of accepting themselves or their family member, and the results can be devastating, even fatal.

“PFLAG Canada is a national voice that speaks for a more accepting Canadian society by providing support, education and resources on issues of sexual orientation and gender identity. Through our PFLAG Canada Chapter and Contact network, we actively assist in the recognition and growth of gay, lesbian, bisexual, transgender, transsexual, two-spirit, intersex, queer and questioning persons and their families and friends, within their diverse cultures and societies.”

PFLAG began in Canada as POG (Parents of Gays) in the early 1970s, later joined forces with FFLAG (Families and Friends of Lesbians and Gays) in the mid 1980s. Here in the Maritimes, education and help for glbt (gay, lesbian, bisexual and trans) persons was almost nonexistent until the mid-1990s when the first PFLAG Chapter in the Maritimes was formed in Halifax in 1994. In 1996 the Amherst Chapter of PFLAG was begun by Rev. Eldon Hay who facilitated this chapter until 2002 when he left to take on the Presidency of the first Executive Committee of PFLAG Canada. At that point, he invited me to assume the chapter leadership, which I did, assisted for a short time in this job by a couple of other members. But soon my partner, Marilyn, joined me as Co-facilitator, and it’s been that way ever since. 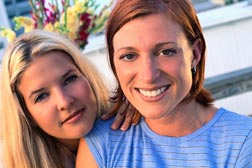 When the phone rings in our house and a voice on the other end says, “Is this PFLAG?” I’ve come to expect anything and everything, all the while praying for a calm, uneventful, happy information exchange! It’s rarely that way. As the dead-ends of conversation arise, I try to think creatively. I try, gently and non-invasively, to learn as much as possible about this person on the other end of the phone line. Might they be in danger—a young person, for instance, who is suicidal?

The person who has called the number I list in our monthly PFLAG press release might be a fearful, closeted 16-year-old who knows he is gay and has never told anyone; a 50-year-old woman who’s been married, raised a family, and now thinks she might be a lesbian; a mother who has just discovered by accident that her son is gay and is distraught; a 22-year-old university graduate who has known he is gay since childhood but still hasn’t had the courage to tell his father because he is homophobic and abusive and the young man is afraid he will be beaten or disowned.

Tonight it might be a father on the phone who has just discovered that his dearly loved son is gay, and is terribly afraid that his son might become sick with AIDS and die, or be killed by homophobic people; or a 17-year-old who doesn’t know what to do—her single mother has just “come out” to her as a lesbian and says that next week she plans to bring her new girlfriend home to live with them. It could be an exuberant single gay man whose job has transferred him from Vancouver to Moncton and he wants to know where the gay bar scene is in Moncton! It might be a married lesbian couple with two school-aged children who have just moved to the area, know no one, and would like to meet other families with two moms or two dads. It might be someone in the midst of changing from the female (s)he anatomically is, to the man he knows he really is.

Sometimes first conversations occur on the phone, but more often than not I will first lay eyes on the person when he or she steps through the door to attend their first PFLAG meeting.

I remember vividly what it felt like to come to my first meeting, and so can Marilyn. Even the bravest person in the world feels a few heart palpitations and strong “maybe I should go home now” inclinations as they are about to open the door to their first PFLAG meeting. Once inside, new people often sit quietly for the first meeting (or sometimes for many meetings), just listening to the others talk, feeling the positive energy in the group, and gathering their courage together.

Marilyn and I didn’t enjoy the luxury of sitting quietly at our first meeting because the chapter’s leader, Eldon Hay, had invited us to be guest speakers—to share our personal stories with the group. While Marilyn and I were certainly “out,” it was nevertheless quite a stretch for us to be speaking openly about ourselves in a roomful of strangers! However, as we shared bits and pieces of our stories, we found ourselves in a roomful of wonderful listeners, soon to become warm “meeting” friends. Little did we suspect at that meeting in the late 1990s that a few years later we would be leading the chapter!

People in small towns like Sackville, NB, can become somewhat insular, especially when winter descends and we hunker down in front of our woodstoves and fireplaces! Marilyn and I wanted to open 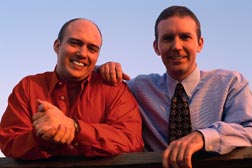 minds and hearts by continuing Eldon’s tradition of inviting guest speakers to come to our meetings to share their stories and experiences. We weren’t sure if we’d be able to find enough guests! Unlike Eldon who meets many people through his ministry, we led comparatively solitary lives of musician and poet. How would we be able to find guests month after month? But we started, and one thing led to another, and one year melted into another, and now we look back on almost five full years of monthly meetings, most with guest speakers.

Each month we advertise our upcoming meeting in the media—newspapers, radio, TV church bulletins, posters and by word of mouth. Since many people hear only about gay and lesbian persons, we always include the following paragraph, which is inclusive of everyone on the “rainbow” spectrum of sexual diversity:

“If you are gay, lesbian, bisexual, transgender, transsexual, two-spirit, intersex, queer or questioning (GLBTT2IQQ) or if you care about someone who is, let us help. Our chapter holds monthly meetings where problems and concerns are raised, loving support is given and received, and valuable up-to-date information is available. It is a safe space: first names only are used, and confidentiality is expected and honoured.”

Our PFLAG meetings are two hours in length, 7:30 – 9:30 pm, and are informal in nature. During the first hour we have a circle. After the facilitator reads the guidelines we go around the circle and introduce ourselves using our first names only. Confidentiality is a requirement: everything said in the meeting, including who is attending, stays in that room. People are encouraged to speak with each other sharing their problems, joys and experiences. However, people may elect to remain silent and simply listen if they wish.

After a short break an invited guest addresses the group informally for about 20 minutes, speaking about some aspect of their life or work in relationship to the glbtt community. Guests in the past have included doctors, ministers, social workers and teachers, as well as people who have struggled with their own issues of sexual identity and emerged with personal strength and wisdom. It is incredibly helpful for parents or friends, as well as for gay or bisexual people themselves, who may be undergoing significant changes in their lives, to hear the experience of invited guests. The guest presentation is followed by questions, more discussion, and sharing.

One of my favourite guests was a woman named Miigam’agan, a member and resident of the Mi’kmaq Nation of the Wabanaki Confederacy and a member of Lobster Clan of the Mi’kmaq Nation, who lived at that time in the Mi’kmaq communityof Esgenoopetitj (Burnt Church). This dynamic First Nations leader brought her young daughter along to the meeting and spoke about the meaning and respected tradition of two-spirit.

On another occasion a woman in her 70s spoke to the group about how difficult it was to be a young lesbian in her home country of Colombia many years ago, and how life changed for her when she moved, first to the United States and later to Canada.

The well-known NB politician Claudette Bradshaw came with her husband to the meeting and talked about a long cross-country trip she and her husband undertook together to investigate youth homelessness. She was shocked to discover how many vulnerable kids in their early teens had been thrown out of their family homes because they were gay.

At another meeting two people, an older gay man and a lesbian woman from Moncton talked about what it was like for them in Moncton years ago when everyone was in the closet.

A loving, accepting mother and father have spoken with the group several times about their gay son who was so harassed in the local high school during his teen years that he will not set foot in his hometown ever again.

Ours is gratifying work because we have been able to help so many people simply through offering them a safe space where they are accepted and shown respect for being who they are. Until I started attending PFLAG meetings myself, I had heard about some of the problems gay people often face but had not personally met these people. I soon discovered that even though k.d. lang, Ellen, Elton John and others have provided a positive public profile on gayness, in New Brunswick’s rural communities to appear to be gay or to actually be gay is still to be an open target for homophobic jokes, persecution, discrimination, and sometimes much worse. For this reason PFLAG Canada has developed a highly effective network of people and resources across Canada, focused on supporting and educating Canadians on issues of sexual orientation and gender identity.

Like all Chapter leaders, I am proud to be able to give a hand to those who need it. New Brunswick should be proud, too. Our small province boasts seven thriving chapters in Moncton, Saint John, Sackville, Fredericton, Woodstock, Sussex, and in the Miramichi! The wonderful friendships we form and the camaraderie we share, both within PFLAG as well as in our outreach work with others in the community, both gay and straight, have become one of our greatest pleasures! Like Bread ‘n Molasses: “It sorta sticks to ya!

Dr. Janet Hammock is Professor Emeritus of Music at Mount Allison University where she taught for 26 years. An active composer, writer and concert pianist, Janet is also a human rights activist. She has Co-facilitated the PFLAG Canada Sackville NB/Amherst Chapter with her partner Marilyn Lerch for the past 5 years.