A Day to Remember
By Stacy Underhill

I was part of the bridal party at a wedding in Toronto. We left the church to go to a park for photos, and then to the reception hall, which was quite a distance away. We exited the church to find the limo driver under the hood with his sleeves rolled up and sparks flying around his head as he fiddled with wires and cables. The park was nearby so we walked over, leaving the limo in the hands of the driver and a few mechanically inclined male guests.

As usual with wedding photos, they took longer than expected and we were glad when the driver arrived with everything in working order so we could hurry to the reception hall via the 401. It wasn’t too long before we noticed smoke coming from the hood, then darker smoke and finally we sputtered to a stop. It was a mucky Toronto summer day so we all piled out of the limo to stand on the highway in our flowing gowns and tuxes, getting a breeze off the traffic zooming by. 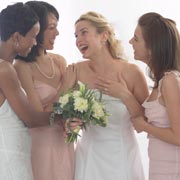 Twenty minutes passed and by this time we were seriously late for the reception. The limo couldn’t be fixed. The driver radioed his office for a replacement but all the limos were in use and we’d have to wait at least an hour for another one. So we hitchhiked. The guys agreed to let us girls go first. There we were, three maids in purple satin and one very distraught tall blonde bride standing on the 401, hitching up our dresses with our thumbs in the air.

There were many cars driving by, honking their horns, yelling out the windows but nobody stopped. They thought it was a joke—maybe because we were laughing our heads off at the ridiculousness of the situation. Anyway, finally a station wagon pulled over. I ran to the passenger window. Inside were a Chinese couple with three kids in the back. They barely spoke English. One of the children could understand us enough to get the gist of what we wanted. She translated to her parents who nodded for us to get in. We wrote the address on a piece of paper, drew a map, crossed our fingers, waved goodbye and wished good luck to the men still huddled around the open hood and crowded in—one in the front with the couple, two in the backseat, and one in the trunk/hatchback area.

We arrived at the reception with everyone wondering what had happened and of course nobody believed us. We were outside recounting the story for the hundredth time when a red minivan pulled up. It was like something you’d see in a movie. It was packed full with teenagers coming from a ball game. All we could see were backs pressed up against the windows, red jersey numbers squished against the glass. There seemed to be limbs everywhere, like a mismatch of different bodies and faces smiling out at us. Then a door opened and one by one, out popped four very wrinkled men in tuxedoes.

Stacy Underhill leads the production team at Mighty Community Group in web and print development. In her spare time she enjoys crafting and is Past President of the Miramichi Region Tourism Association.