The Wicked Tide
by Christina Decarie

When Sal’s body finally washed ashore, he was all torn up. “From the grapplin’ hooks,” the fishermen said. “They just didn’t get a good grip of him, is all. But they grazed ‘im. Right where that capon

crowed.” And the fishermen nodded and looked at each other knowingly.

But I didn’t know. What was the cape on? I thought. Was Sal wearing a cape?

A boy down the road said that crabs had eaten out Sal’s eyes, and snails had moved in, but that boy likes Tales from the Crypt, so I wouldn’t believe everything he says. Snails wouldn’t move into someone’s eyeballs. They live in shells.

I wasn’t allowed to go to the funeral. My mom said eight years old was too young and that I didn’t even know him. But I did.

“The tide — she can be wicked,” the old fishermen said. “The wind, man, it’s the wind.” All the old men, smelly and crooked, shuffled around the wharf, while their sons went out on the water.

“What about the wind?” I asked my mother, but she didn’t hear me because the bag holding our lobsters was cut by their claws and dripping on her skirt.

“They’ll suffocate,” she said. “Or do they drown up here?”

How could a lobster drown? I thought. And then I wondered how I could.

I swam in the same water that they found Sal, and I thought about what those old men said and the wicked wind and the tide. I let the water into my mouth and held it there. The same water. And I choked and snorted the salt water through my nose. When will it get me? I thought. The wicked tide.

The day they found Sal, I was poking around the kitchen, looking for something to do. It was hot — so hot I told my mother I wouldn’t wear underpants, and she said it was okay.

I said, “I heard only dirty girls don’t wear underpants,” but she said I was too young to be dirty and not to listen to what people said.

So then I said it was so hot we should go swimming, and that I should be able to wear my swimsuit. But my mom said my swimsuit was rancid, and I could go put on underpants and take off my dress and go in the water like that.

I said, “If I’m too young to be dirty, I want to wear my swimsuit again.” But she said it was my suit that was dirty, not me, and after wearing it every day for a week, it was time to wash it. I didn’t tell her I’d been sleeping in it too.

So we floated, together, me and my mom. She wore a swimsuit. Hers wasn’t rancid.

“Why is the tide wicked?” I asked my mother.

She said it was wicked because it was dangerous. “Because it could grab you and suck you under, and that is why you must never swim alone.”

“Is the tide here?” I asked her, and she said it was everywhere, and so I waded back into shore and took off my water wings and sat in the shade awhile. I thought about Sal and hoped that no boys would walk down the beach to where I was, worse than naked, in my underpants.

Before Sal disappeared, before he went out in his boat that last time, he winked at me at the store. I was sucking on liquorice and scratching on a mosquito bite on my leg, and Sal nodded at this guy I never saw before, and the other guy touched the peak of his cap and tapped his shirt pocket that was bulged out and full of something. I never saw anyone do that before. Then I looked back at Sal, like it was tennis on TV, and Sal gave me a look like he was worried and surprised and mad all at once. My mom was done paying, and I had to follow her out the door or get a bad look from her, and so I followed. But I turned around and the lady at the cash gave the guy with the cap a real bad look. Worse than my mom can give.

Sal was gone three days before the helicopter came, but I’d seen one before the summer before and so didn’t really pay any attention. It was loud though. I was knee-deep in the water — far as I can go without an adult around — and I heard it a long time before I saw it. But I wasn’t really looking anyhow. Helicopters don’t do anything but fly around and make a lot of noise. I looked down through the water at my toes. This was before I knew about the wicked tide. But I was okay, and I went in to shore and sat on a rock with just my toes in the water. Now I wonder if the wicked tide could’ve reached up and gotten me then.

Sometimes at night — before Sal disappeared — it wasn’t a helicopter that flew by, but a plane. The kind that lands on the water. It was quieter and flew in from the south, more over the water though, and then swooped in low near the big point and then straight up again. I told my mom, and she said it was probably from the base across the way.

“Do they drop things when they do manoeuvres?”

“Don’t ask stupid questions,” she said, and I knew she didn’t want me to ask any more questions. I didn’t know why it was a stupid one.

So I sat up and watched through my bedroom window, waiting for the little plane to swoop down low to the water, so low I thought it would smash into the boat that was there, and drop things into the water and swoop right back up and away again. The ladies at the store must’ve watched the plane and the boat, too, because once I heard one say, “Who would need to have his boat out at night at this time of year?” No one answered her.

I wondered why Sal had been out at night — the night the wicked tide got him.

After they buried Sal, I heard a lady at the store say, “See, there was no need to call in the RCMP and the Coast Guard and get them all meddled up in this. We found him. We found him our way.”

Another lady said, “That chicken didn’t find no-one. Not no-how.”

“The capon did,” said the first lady. She was gawky and skinny and when she talked her whole head and face kind of bobbed forward. The other lady wasn’t even looking at her. She was pretending to look over a carton of milk like she had to make sure it was the exact one she wanted. The skinny one just kept on talking and bobbing. “Those marks are proof,” she said. “The grappling hook grazed him good.”

“Those marks couldn’t have been from the rocks.” 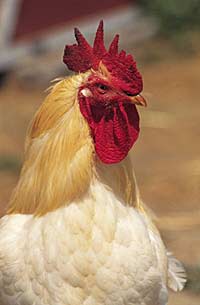 I looked at my fingers. What do bones know?

I asked my mother, “Is a capon the same as a chicken?”

And she said it was.

I don’t know where they buried Sal. But the chicken — or the capon or whatever they call it — was plucked and cut-up and put in someone’s freezer, but they’re not going to eat it. A lady at the store said she would bet money on it. I’m not allowed to leave my bread crust behind, no matter how tough it is, because children are starving in China, but someone just down the road is letting a perfectly good chicken rot in their deep-freeze. Well, maybe not rot, but it certainly isn’t getting eaten. I told my mother that I thought they should give that capon to China, but she said she didn’t think that was very funny. I thought to myself that it wasn’t meant to be funny, but something told me to keep that to myself, and I choked down the crust of my toast even though it didn’t even have butter on it, because my mother never butters my toast all the way to the edges.

So I asked my mother, “If it’s just a chicken, why is it called a capon?”

“Because it’s different. It’s a boy chicken that isn’t a man.”

“This isn’t about this Sal business, is it?”

“So what if a capon crows?”

“It’s a chicken. It doesn’t have special powers. It doesn’t communicate with the dead. It’s just a chicken.” She looked hard at me and said not to listen to the ladies at the store, that gossip and superstition was wicked, and that the business with Sal was over, and a chicken’s got nothing to do with a bash on the head. “If a man wants to risk his life for some weed and a few extra dollars, that’s his own problem.”

Why are so many things wicked? I knew better than to ask my mother.

I went down to the shore and waded up to my knees and lay down and floated. This wasn’t what my mom meant by only going up to my knees, but I knew I could pretend I didn’t understand the difference.

Christina Decarie was born on Prince Edward Island, grew up in Kingston, Ontario, and then moved to Montreal because it was cool. Her writing has appeared in Queen’s Feminist Review, Pottersfield Portfolio, and Front&Centre. Black Bile Press published her chapbook of short stories, Nemesis Girls, in 2005. She now lives in Kingston where she teaches communications at St. Lawrence College and works as a freelance editor and writer.