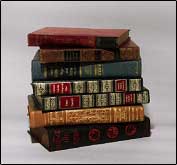 the bad.At one particular time the buzz around town concerned the middle-aged lady who owned the bookstore. I frequented her store quite often and knew her fairly well. And I, too, had heard the story of the young man who came to redecorate the shop and the developing romance between the owner of the bookshop and the young man. The whole town was tuned in, as most small towns would be, to the unfolding drama of this May-December romance.

One day I dropped into “Between the Pages” to pick up a book I planned to buy. The lady wasn’t there, but the young man in question was in charge it seemed, handling the cash register like a pro. I paid for my purchase with a cheque as I always did and left to go home.

When I pulled into my driveway a few minutes later my two teenagers were hanging out the door, and yelling for all the world to hear that, “The man from the bookstore called and your cheque is no good!”
I immediately turned around and drove back to “Between the Pages,” wondering what in the world could be wrong with my cheque. Imagine my embarrassment when the young man passed me my cheque and there in my very own bold print I saw that I had made it payable to “Between the Sheets!”

Thanks Dr. Freud, wherever you are!

Bonnie Jarvis-Lowe is a retired Registered Nurse living in Shoal Harbour, Newfoundland, passionate about photography, writing and her family. She has two grown children and one granddaughter, who all live too far away from her in Alberta. She writes

for local magazines and newspapers, Releasing Times, Medhunters.com, Tidespoint.com, and various writers groups and publications. An anthology of short stories called Up Til Now is available through www.shopdownhomer.com or directly through her. “To share my work gives me a great sense of satisfaction.”