I knew I’d got off on the wrong foot as soon as the nun made me stand in the garbage can, at the front of the class, because of my “antisocial behaviour.” So began my twelve years of convent education.

The convent had advantages as well as disadvantages, but as a child I didn’t find it easy to identify the positive aspects. I had no problem finding the disadvantages. From a child’s point of view, the problem with the convent school was not the academic education, but what we were taught to think about religion and all other aspects of life. Only rebels tried to think for themselves.

The convent I attended is located on Cape Breton Island, where music is a very important part of life. I had not been in the convent long before I found out just how musical I am. Our school choir sang in public, and the nuns felt that our singing reflected their musical capabilities. We had to be in the choir no matter how we sang, and the fact that I was a lousy singer did not get me off the hook. I was instructed to mimic the words without ever allowing a note to come out of my mouth. I could understand why they would not let me sing, but I could not comprehend why I had to attend every rehearsal.

I always looked forward to the yearly play the school performed for our parents. One year, selection for the lead role in the play Hiawatha was between me and another girl. Although the nuns thought I was the best actress, the other girl looked the part because she had long braids, and in their minds she resembled the stereotypical Indian. That night I prayed to God to help me grow braids overnight. When I woke up the next morning I ran to the mirror, but God hadn’t come through, and this was the end of my acting career.
The nuns taught us how to dress and undress without showing any part of our body. What, pray tell, would be the usefulness of this talent? We also learned how to dress modestly. We had to wear a uniform every school day except Friday. This relaxation of standards was not a forerunner of the modern “dress down Friday,” but simply the day our uniforms would be cleaned. We were taught that the body was God’s temple and that to reveal any part was offensive to God.

Once a month a nurse came to the school to see if anyone was wearing an up-lift bra. This search was not a problem for me as I was still at the stage where I just wished I needed a bra. Some clothing items, such as strapless dresses, were outlawed because it was thought they would lead the opposite sex to evil thoughts. If anyone had the nerve to wear a strapless or revealing gown, they were not allowed to graduate. The nuns chaperoned the dance and policed the dance floor. They carried long rulers, and if you were dancing too close to your partner, it was not long before you felt the ruler come between you and him. 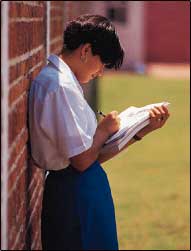 The nuns were highly motivated to develop educated women who could get ahead in the world. Students were encouraged to read, but I soon learned what not to read. One day I went to the library and asked for a book by Sigmund Freud. The librarian congratulated me on being able to pronounce the name properly and told me that reading Freud could lead me to hell. Although education was encouraged, it was tied to the perspective of the teachers.

This was in the 1950’s, when the stereotype of women was best portrayed by June Cleaver on the TV series “Leave it to Beaver.” The mother’s world was her husband and her children; she was socialized to live within these boundaries and to like it. On one hand the nuns were encouraging this stereotype by saying, “Marry a nice Catholic boy, be a good wife, have children and stay at home and look after them.” At the same time they were saying, “Get an education and you will have the opportunity to do anything you want.” Talk about mixed messages.

When I look back on my convent days I see the humour I could not see when I was younger. The nuns must have done something right, because I developed a love for education. After high school I moved away from the island, and 25 years later I was notified of our high school reunion. At that time, I had just finished my PhD and was a candidate for the federal Liberal party. I decided to attend the reunion, as it was a good opportunity to renew old friendships. One of my friends showed the nuns a political pamphlet on my nomination for the Liberal party.

The Catholics in Cape Breton are traditionally hard-line Conservatives, so you can imagine the reaction my politics invoked. All of a sudden it was like I was a child again: one nun rose to her feet and announced to all the guests that I might have done well in the education field, but she always knew that politically, I was up to no good.

Donna Spalding is a displaced Cape Bretoner and retired professor living in Hampton, NB. Her articles and stories have been published in Readers’ Digest, Celtic Heritage Magazine, The Reader, Homestead Magazine and the Kings County Record.