A View from the Ridge — Our Curious Ways
By Ridgely Goldsborough

The young woman strolled beside the older man along the edge of the coastal dunes. She had grown up with this man, her mother’s long-time beau, in some ways more her father than her biological dad. She loved the way he respected her like an equal, always genuinely interested in her thoughts, ideas and latest project. She cherished their time together, especially on those rare occasions where he opened up.“Look at the crab,” he urged. “It always finds its way back to its hole—no matter whether the wind blows, a bird swoops or a wave buries it for a moment. I find that curious.” She glanced over to 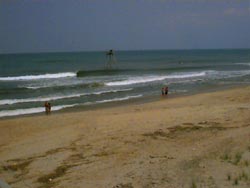 acknowledge him though said nothing. “Fish swim 6,000 miles down a river, through a bay, into the sea and back again without any roadmaps, directions or instructions. I find that curious, too.” The old man paused.

“Fish know the ways of fish,” she interjected, a phrase she had heard from him before.

He smiled. “Indeed,” he stated. “Unlike humans.”

“Oh?” she asked, her familiar way of stating a question.

“The poor want to be rich, the rich don’t seem particularly happy and unlike fish, we have ways to change our station and seldom use them. I find that the most curious of all.”

“What do you mean?” she probed.

“The rich know the ways of the rich. Once rich, most have little hesitation to share these ways and have laid out the path clearly for anyone to follow. Doesn’t matter. The poor continue to walk the path of the poor, more apt to complain than attempt to learn or change, despite the fact that it’s all there, available, to end their plight.”“It’s not so simple,” she countered.

“Oh, but it is,” he argued. “Not easy perhaps, yet very simple—and accessible.”

“At the library. On the internet. Anyone with the will can tap the source.” He walked steadily through the sand.

“What about you?” she persisted. “Didn’t you lose it all?”

”Twice,” he chuckled. “The second round even bigger than the first.”

“Why?” She swallowed her slight annoyance.

“Because I did not know the ways of the rich, nor did I respect them,” he declared without hesitation. “Furthermore, and maybe more salient, I chased dollars instead of dreams.”

“The only thing that could that would make any difference—me.” The old man fell silent for a spell. She waited. “Without the respect, money left as fast as it came. Without the skills it would have left over

time anyway. Without the passion, I would never have had the stamina to start over. Only when I put forth the effort to learn the ways did money return. Without a dream congruent with my values and big enough to make the effort worthwhile, I imagine that I would have quit, even though that may seem odd to you now.”
“I can’t conceive of you quitting at anything,” she declared.

“The product of viewing the end result, not the raw material, nor the many hands that shaped it,” he said. “We all stand at ground zero at one point or another. Pity that many of us never take the first step.”

“What if it takes a really long time?” she inquired.

“It doesn’t matter. Where will you be if you do nothing in a ‘really long time’?”

“And a ‘really long time’ older, more rigid and perhaps even bitter.” The old man slowed his pace.

“How did you escape?” she pressed.

He put his hand on her shoulder. “I failed my way forward,” he finished, “as can you.”

Author Ridgely Goldsborough publishes The Daily Column; humorous and inspirational stories designed to touch our hearts. Please take a moment to subscribe at no charge at www.aviewfromtheridge.com
Logging In...