Grand Falls, Unassuming
The Wheels on the Bus
by Alexandra Chasse 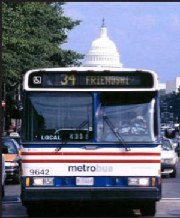 October 27, 2005 — Not long after we arrived in the States from Germany last April, my husband began the tricky task of scouring the Internet for affordable, solid housing here in Washington, DC. After a couple of weeks of Web searches, phone calls, and viewings, we found the apartment we live in now. And if we weren’t already lucky enough to have a spacious two-bedroom spot with hardwood floors in a leafy downtown neighbourhood, we also have a bus stop right in front of the building. Those of you who’ve spent any significant time living in urban settings understand the exceptional convenience of having a public transportation stop right at your door. But if you, like me, grew up in a rather isolated town, there’s also a small thrill that comes from taking busses in general.

Give me nearly any bus in the peaceful world, and I can waltz right on, pay the fare quickly (so as to not annoy those queuing behind me), and get to my destination of choice without frantically gawking out the window at every bus stop sign to make sure I don’t miss my stop. But this bus-competence didn’t come without trial. It shouldn’t surprise anyone that, having grown up in unassuming Grand Falls—where the instalment of traffic lights was a big leap for progress—I had to go halfway around the planet for my first adult bus ride. A week after arriving in Inch’on, South Korea, on my first teaching contract in 1998, I foolishly decided to take the bus from my apartment building to the nearest metro station, without knowing how to read Korean. As the cute little pink bus (I swear, they ride Hello Kitty busses in Korea) rounded the corner and neared the stop in front of my apartment building, my heart thudded as I mentally repeated my roommate’s earlier instructions: Count three stops and get off at the fourth. Count three stops and get off at the fourth. This mantra was still looping in my head when I noticed, as my change plunked into the collection box, that the bus was oddly quiet. It had already hit me as I slowly turned around: I was the only non-Korean. On. The. Entire. Bus.

Children stopped whining at their mothers. Salary men lowered their newspapers. Skirted schoolgirls put their gossip on hold. Were it not for the rumble of the bus slowly pulling back into traffic, you

could have heard a noodle drop in that pink contraption. I swallowed, went down the aisle a few steps, and sat next to an affable elderly lady who promptly offered me a honeyed rice cake. I smiled and took the rice cake, exhaling slowly as I bit into it and calmly thought, Count three stops and get off at the fourth. This isn’t so hard. I made it to the metro station in one piece, having successfully executed my first adult bus ride. Never mind that I went to the wrong bus stop on the way home later that day, and ended up wandering around in circles for two and a half hours before stumbling upon my apartment building (count three stops and get off at the fourth works only if you know how to read the bus stop signs in the first place).

Illiteracy aside, I should confess that the Pink Korean Bus Experience wasn’t as daunting as it might have been for another foreigner in my situation. All those stares might have intimidated someone else on their first adult bus ride, but I’d choose them any day over the only bus rides of my childhood in small, unassuming Grand Falls. Yep, I’m referring to that perennial booby trap for awkward eighth graders in rural communities everywhere—the School Bus.

If you’re one who went through the dorky, geeky, or otherwise outcast version of the eighth grade, you clearly understand the stomach-churning hell that is the School Bus. On school grounds, there are ways to deal with mean girls who stomp on your lunch bag and say things like, “Sandy, you could be popular. If only you wore some makeup and better clothes.” For instance, you can hide in the library at lunch hour. You can stay in homeroom and do your homework while the popular girls circle up outside and talk about weekend parties in parentless houses. But in a small rural community where your house is a mile and a half from school, you can’t avoid taking the School Bus home. And nothing spells “prison sentence” like being trapped in a moving yellow bunker with mean kids plotting their next taunt, especially if your stop is the very last one. And, with minimal supervision coming from the only adult on the bus (after all, the driver has to pay attention to the road . . . sometimes), there is virtually no limit to the unusual cruelty junior high kids can dish out on the School Bus.

I could say that the experience as a whole—riding the School Bus in the eighth grade—toughened me to the point where, as an adult, I could handle a busload of Korean strangers staring me down. But that would be cheating, since I think one incident in particular eclipses all others in the magnitude of mortification it inspired in me one day on the School Bus. The backdrop: my parents had decided to take a week’s vacation in the fall of the eighth grade. Try as we might have, no amount of begging or negotiating from my twin sister and I could convince them that we were old enough to stay at home by ourselves. The problem wasn’t the alternative accommodations they’d arranged for us; after all, I quite liked the elderly neighbours who’d agreed to take us in for the week. Rather, the problem was that the School Bus went right by their house. Which meant that we’d have to disembark there instead of at our house. Which meant everyone on the School Bus would see us disembarking there, for an entire week. When you’re 13 and trying desperately to fit in with girls who throw parties in parentless houses on weekends, the revelation that you’re being babysat just kills your fledgling social life.

The prospect of all this loomed darkly over my sister and me as my parents’ departure day neared. We quickly devised an after-school plan to avoid the teasing that would inevitably come from the ringleader of the popular girls on the bus (I’ll call her Snake). It was simple: Instead of getting off at the new stop, we’d stay on the bus and get off at our house as usual. Once the coast was clear and the bus was gone, we’d walk the mile and a half in the opposite direction to Hotel Elderly Neighbours. The morning bus ride wouldn’t be a problem, since Snake got on the bus after we did.

The scheme worked perfectly for the first couple of days, until mid-morning on day three when buckets of frigid, late October rain began pouring from the sky. As the day wore on and the rain kept falling, I lost all concentration and sank lower and lower in my seat in class, because I knew I just couldn’t walk a mile and a half in the drumming, wet cold. I could see that the gloom in my sister’s eyes matched mine as the school bell rang at three o’clock.

We boarded the bus and found seats close to the front—we wanted our exit to be as quick as possible. As the bus left the school and we began our final approach to certain embarrassment, I rubbed a circle on the foggy window and tried hard to shut out the rowdy noise surrounding us. This distraction was pitifully futile—the first streams were starting to dribble from the circle’s lower half when the bus started slowing down and we were almost at Hotel Elderly Neighbours. I started to sweat—I could feel the redness climbing up my cheeks.

My sister and I rose from our seat. Near complete silence ran from the front of the bus to the back, as I felt dozens of eyes drawn toward our march to the door. Someone finally sneered, “Hey, why are you getting off here?”

I could practically see the smirk on Snake’s face through the back of my head as my feet hit the second step of the bus. I would have jumped through the window to avoid hearing what came next: “Oh look,” she said sweetly. “They’re being BABYSAT.”

The laughter still rang in my ears after the bus doors closed—it even seemed to drown out the rain. I cursed my parents as we headed up the driveway to the house. In my thirteen-year-old mind, they and they alone were responsible for whatever fallout I’d have to face in homeroom the next day (Mom and Dad, you know I love you, but this one was pretty hard to forgive). As the School Bus disappeared over the hill, my sister and I said nothing, but I knew she, just like I, was mentally crossing out any hope of being invited to any parties for the next year.

Looking back on the experience, I still remember the harassment that ensued in the following days at school, and the snickers that rippled through the bus every time we disembarked that week (the cat was out of the bag, so there was no point in getting off a mile and a half away anymore). But by November, I had largely forgotten about the School Bus incident and was one month closer to the ninth grade (the year things started to look up). Nevertheless, I sometimes wonder how my sister and I would have reacted if My Future Self—the fearless one from the Korean bus—could have somehow whispered in our ear, as we got off the School Bus that day, “Don’t worry, girls. This will absolutely make you a better person.” I wonder if I would have grasped that, even though this awful bus ride would be hard to forget (geez, I’m still writing about it at age 30), it would somehow, in a very strange way, send me down the road to an unforgettable series of adventures around the world. After all, I saw North Korea from a bus. I crossed the Danube in a bus. I took a bus to a centuries-old Czech wine cellar. I even boarded a bus in Malta with this advertisement on its flank: “With so many car accidents on our terrible roads, doesn’t it make sense to take the bus?”

In this sense, I choose to pay homage to the School Bus. I suppose that ultimately, I’m thankful for those hard, lonely vinyl seats. All my strange, wonderful adult bus rides have almost been worth sitting through that one lousy afternoon.