October 11, 2005 — Washingtonians, like most big-city dwellers, like to look good. They dress well. They eat well so they can look well. And they have good haircuts—even the students. My husband Kurt, 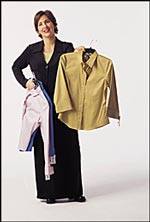 who’s doing a Master’s at the Johns Hopkins School of Advanced International Studies, is no less attentive to his coif and togs: “You never know who you’ll run into at the school, and I at least don’t want to look like a slob.” Case in point: a couple of months ago, he shared an elevator with the former Acting Director of the CIA, John McLaughlin.

Though I’m not vying for the kind of summer internships that my husband hopes to earn next year, I’ve also learned to play a bit of dress-up whenever I leave the house and expect my audience to extend beyond the oh-so-critical eye of my nine-month-old son. In preparation for even the shortest, most mundane trips to the Safeway grocery store with the baby, I’ll forgo sporty (and exceptionally comfortable) sandals in favour of more aristocratic (and less practical) suede flats. In the Big City, I want to project the image that, as a new mother, I’ve still got my act together, I’m still organized enough to select my grocery-shopping wardrobe, and – most importantly – it isn’t hard for me to pull it off, either.

The truth is I’ve been practicing for this kind of display for years. Like many small-town ejects, I take pride in being able to show off my fashion acumen to city passers-by whom I’ll never see again. It’s a given fact that smart dressers get better service at airports, restaurants, and (from my own personal, frustrating experience) immigration offices. But that isn’t the real reason I want to look good: I revel in the thought of somehow running into old peers from unassuming Grand Falls, New Brunswick, no matter how minute the possibility, just to show them how dismissively cool I’ve become since the nerdy days of my youth. Back then, I shrank at the thought of riding home on the bus with the more trendily dressed, cool-but-cruel popular girls, dreading their barbs about my so-five-minutes-ago jeans or hair (which drooped of boring-ness compared to their Aqua-Net skyscrapers). OK, I may be slightly exaggerating about the lasting scars of my teen years in Grand Falls (but I will say this: those long-ago bus rides are worth an entirely separate entry). After all, I’m alright—and on some days, I really don’t give a fig what people in Safeway think. But I can’t lie—when it came to my ten-year high school reunion a couple of years ago, my single biggest priority was looking good. No, looking really good.

Though I’ll never know exactly how many of my old friends shared this sentiment as they prepared for the reunion, I now know that I wasn’t the only one hoping to right the fashion wrongs I believed myself to have committed years ago. We can make ourselves believe that high school reunions should be about reconnecting with old friends and laughing about how mature everyone has become, but we all know that at these events, talk of marriage and kids is a boring wash (unless, of course, these topics can be followed with the words “annulled” or “illegitimate,” in which case you’ll be a hit.) Really, isn’t the High School Reunion all about whose looks have gone south (especially the ex-Populars) or north (just try to keep from snorting, “I wonder how much THAT cost?”) Let’s not deny it: it’s a guilty pleasure that is shallow, petty, and hands-down justifiably fun if you were one of the popular girls’ stomp-ees. But sometimes, someone comes along and upstages everyone else’s trivial post-adolescent paybacks with a change so triumphant and shining it softens even the crustiest cynics.

This revelation came to me shortly after I headed for the bar at Suzanne’s Pub on that fateful evening two years ago. I was having a great time: I looked good, and I found myself actually appreciating how

good a lot of my old classmates looked, too. But someone in particular stood out: a svelte, attractive blonde who had been mingling through the crowd and asking the same question over and over: “Do you remember me?” It had gotten to the point where I thought she’d taken the wrong exit on the Trans Canada Highway and she thought she was at the Perth Andover High School reunion, since most people were drawing a complete blank when Ms. Unknown came around. I had just begun to wonder how she kept smiling when she cornered me at the bar: “Hi Sandy. Remember me?” My obvious embarrassment didn’t phase her one bit, in fact she beamed: “It’s me, Caitlin” (at least that’s what I’ll call her here.)

I was speechless—Funny Fat Caitlin from biology class was right in front of me, and I hadn’t the foggiest. No one had, no less due to her buoyant mood that night—in high school, she had also been known as Funny Fat Caitlin With the Chip on Her Shoulder. I could immediately see why she was having a wonderful time—she looked fantastic.

To this day, I have two salient memories of Caitlin’s reunion walkabout. One, she was absolutely smashing. Second, this smashing-ness was eclipsed by the meticulous detail with which she was reminding everyone of her less-than-fun high school experience. I can’t possibly remember all the details of her story, but it was good enough for me to buy her a drink while she unloaded: not only had she been a dietetically challenged, frizzy brunette in high school, but academics had proven more than an uphill battle as well. While I had blithely occupied the more prestigious college-prep courses in high school, Caitlin had shouldered the double-whammy of being heavy AND . . . “not as smart.” It was a wonder that she graduated with the rest of us: when she wasn’t struggling at school or deflecting verbal missiles with her acerbic, cynical humour, her spare time was spent toiling in a part-time job at McDonald’s to support her and mother (whom her deadbeat father had left penniless a few years earlier.) And I thought choosing a colour for my prom dress was hard.

As she rounded off with details of her young son (she was now a single mom) and a well-paying job that she took great pride in, I marvelled at the fact that she had accomplished so much from such a lousy

start. I also realized that, in high school, I had never gotten to know Caitlin half as much as I should have.

I still can’t help but admire the show she put on at the reunion, which brings me back to my original point of why we strive to look good. It was as if Caitlin didn’t want anyone to forget, I have finally arrived, people. If you didn’t remember me then, you will now. Did she do it all for us, for just one night in a bar in small, unassuming Grand Falls? Of course not—she did it for herself. Her appearance that night was so much more than a lovely face and a great figure. It was a reminder that, sometimes, you get a second chance to define how people will remember you. This is a monumental, life-affirming achievement, especially if you were ever Funny Fat Girl.

I can’t hope to ever generate the feel-good drama that Caitlin brought to the reunion that night, but she inspired me—and no doubt, most of us at the reunion—to keep trying, even on trips to the Safeway store. After all, it’s always a thrill to catch someone’s eye—especially if the thing that’s doing the catching comes from the inside out.

Welcome back, Class of 1993. Award for Most Changed: Caitlin.