The Shortest Resolution Ever
By Bonnie Jarvis-Lowe

The New Year’s party at our house was in full swing. It was 1977 and the party guests were all ‘baby boomers,’ as were my husband and I. All of our guests were neighbours, friends, co-workers, in our

thirties, two-income families, with two children, a house with a recreation room, and the song that said, “We had freedom, we had money, in the land of milk and honey, kids of the baby boom!”

Still full of the enthusiasm of youth that allowed us to play practical jokes like college kids, but mature enough to know we had the responsibility of good jobs, homes, and children that needed us. We worked hard, and we partied just as hard at times. In the 1970’s thoughts of RRSPs were not a concern, but our worries about good childcare and mortgages filled our conversations. Our party times were playful, full of laughter, and most often, full of lots of cigarette and cigar smoke. In those days the majority of us smoked. But I had a husband who, even in those days, despised smoking, the smell of smoke, and the filth of ashtrays. He had been known to screw ashtrays in cars tightly shut, but he discovered much to his chagrin that you can’t stop a smoker that way. So, for the few who did not smoke, they were stuck in rooms full of second-hand smoke, regardless where we met as a group. Smoking was in, and at a party smoking was extreme. The prevailing attitude was “if it feels good do it!” 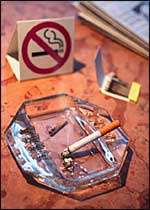 So at this New Year’s party, of course the subject of resolutions came up and was bantered about. Studies were beginning to show the reality of the dangers of smoking—the cancer, emphysema, and various other diseases. Even bladder cancer had been linked to smoking. The seed had been planted that maybe this was not a good thing. For some it made them determined to quit, others would say, “I don’t plan to live forever anyway, big deal!” They would carry on the two pack a day habit with the cavalier attitude of the young and invincible. In the group on that New Year’s Eve one of the men challenged the smokers, and he was a smoker himself, to quit at midnight. That would be the resolution. So they huffed and puffed as many cigarettes as they could between eleven and twelve o’clock. The air was blue with smoke and the coughing and hacking and hoarse voices were the result of the smoking marathon. I was a light smoker, could take it or leave it, so I didn’t get too involved. No point in me making a resolution I know I won’t keep, I thought, and I carried on being the hostess. I had no intention of taking sides in this thing, but that was not so for my husband.
Twelve o’clock came, we watched the countdown in Times Square on television, did the customary ring of friends handholding and singing of Auld Lang Syne, and right on a cue all the smokers tossed their cigarettes into the wood stove. Any in pockets or purses were not touched apparently but any in sight were thrown into the fire.

“OK,” said my husband. “If there is no smoking there will be no need for ashtrays!” He then collected every ashtray he could find and threw those in the fire as well. No big loss, all dollar store items and the occasional souvenir, so they would not be missed, and certainly if no one was smoking they would not be needed. And that was that, a group of non-smokers entered 1978 with a firm resolve that smoking is bad, smoking hurts and they had quit, once and for always. The party carried on, the laughter and music was great, as I went to prepare food. The group settled down and talked about the past year, their plans for the New Year and all seemed to be on an even keel; that is until about ten minutes into the New Year.

Returning to the room around the ten-minute mark after midnight, I saw half a dozen grown men and women on their hands and knees with a poker, furiously trying to rescue an ashtray from the burning fire of the stove. The resolution had met with disaster when a friend lit a cigarette out of a pack she had in her purse. She never said she had quit she announced, and with that the rest of the quitters turned into withdrawal freaks who were obsessed with getting a cigarette. They would literally go through fire for a dime store ashtray. One ashtray was rescued, the woman passed the cigarettes around and everyone made the remark that they would start their resolution at noon on January first, later that day. The air turned blue again, the huffing and puffing continued and when the package of cigarettes was finished they all decided to call it a night.

I often wondered after that how many convenience stores close to my house had people buying cigarettes at one thirty that morning. My husband couldn’t believe he had witnessed the best-made and fastest broken resolution of his entire lifetime thus far. I just chuckled to myself. I had some kind of built-in little motor that allowed me to smoke a cigarette and then never touch another until whenever, whether it is the next week or next month. My friends could not all do that, and the rest of the parties of the winter were still smoke filled, and often some of that smoke was mine. Gradually these people quit over the next few years, and now some of us are actually offended by the smell of cigarette smoke.

Most of our group were health professionals, such as nurses, doctors, and pharmacists. We saw the effects of smoking every day. But still it took a long time for the message to reach our dumb brains that “Smoking Kills.” Now we look back in dismay at the photos taken then, all of us holding a cigarette, or cigar, feeling very invincible and totally “cool,” and realise the photos make us look ridiculous.

It had to be the shortest resolution ever made and kept! Professional people, knowledgeable health care providers, down on their hands and knees poking an ashtray from a glowing wood stove fire. Such was the power of the cigarette. Thank heavens now we have moved on, and we are fighting the battle of the chocolate and cholesterol high foods, and those resolutions about we have to keep, because now we are older, somewhat wiser and we know that if we make those short resolutions that last just ten minutes, we will truly pay with out lives!

No “butts”’ about it, we get too soon old and too late smart!

Bonnie Jarvis-Lowe is a retired Registered Nurse living in Shoal Harbour, Newfoundland, passionate about photography, writing and her family. She has two grown children and one granddaughter, who all live too far away from her in Alberta. She writes for local magazines and newspapers, Releasing Times, Medhunters.com, Tidespoint.com, and various writers groups and publications. An anthology of short stories called Up Til Now is available through www.shopdownhomer.com or directly through her. “To share my work gives me a great sense of satisfaction.”
Logging In...