Mother was a woman on a mission as she skirted ahead of me into the supermarket. She didn’t have to hurry, but that is a trait she has and she passed on to me. We have this crazy inclination to continually put ourselves in a “Hurry up and Wait” mode.

Summer was here and we were home from Nova Scotia to visit our Newfoundland families. My parents were living in St. John’s and the Dominion grocery store was close to where they lived in Pleasantville, so they always shopped “at the Dominion.” They still do, but they live in Mount Pearl now.

Father visits the Dominion daily and loves browsing the aisles. He has more time now then he had at the time of this incident. His retirement and age allow him the luxury of taking his time and chatting with people.

But this experience happened when I went on a shopping excursion with my mother on a gorgeous summer day.

As usual she was ahead of me and in all fairness should have had signal lights on her shopping cart. Boy, could she go! Then I spied a whole bin of fabulous, huge watermelons and ran to catch Mother and inquire if she had noticed them.

“No, where are they?” she asked, as she whirled the cart around and headed back to the produce section.

To my never-ending regret I answered, “Yes, I love them on a hot day. I like to eat it outside and spit the seeds!

Mother gave me one of those “When are you going to grow up?” looks, which I ignored as always

One thing to be said for my mother is that she will go to the outer limits for her children and grandchildren. Anything she can manage to give, if she finds out you want it, or like it, will be yours if Mother is aware of it.

But this watermelon deal was no simple procedure, because Mother decided she had to have the biggest and best melon. I mumbled that it did not have to be really big. Then she pointed to the sign hanging above the bin that stated “Watermelons, $2.99 each.” So, that being the case, she wanted the most for her money. I knew immediately what that meant! I instinctively knew that the melon she wanted was at the bottom of this bin of six hundred pounds of other melons!

I started removing melons for Mother’s inspection, placing them in an empty grocery cart. Each melon was rejected for a myriad of reasons. Then, sure enough, half an hour later, from the bottom of the bin, I pulled out one of the last melons, and it got Mother’s stamp of approval. She never explained what the standard was for the best melon, but she had the one she wanted. I placed the precious, and perfect, melon into her cart, and she sprinted off, pleased with her selection. I started to reload watermelons into the bin, wondering why I ever mentioned them.

All the things on her list were bought, and we headed home. I teased her about her purchase and told her I would spit seeds all over the kitchen. That brought another of those famous looks! This time the “look” was accompanied by a huge sigh! 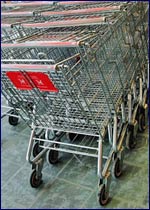 We searched the car and the house, but found no watermelon. By this time Mother was furious! Now this is the very same woman who chased me all around Robin’s Cove in Twillingate when I was six years old. I remembered her fast running, her long hair blowing in the wind, as she tried to catch me and punish me, because she thought I had stolen a piece of gum from the store.

She turned to me and said, “Get into the car. We’re going back to the store. They are not getting away with this. They stole my watermelon! I’ll tell them just what I think of them!”

This was serious stuff. She was so angry I pictured a scene of epic proportions as she attacked the grocery boy. What to do, what to do? I was scared stiff and my heart was pounding. I was in a frightful state, fearing her wrath when we got to the store.

We arrived at the ‘Temple of Doom’ and Mother was out of the car before it came to a complete stop. She headed for the grocery pick-up area.

“Oh, there you are Ma’am,” a young man said. “I had put your watermelon in a box because it’s so big, and I forgot to put it into your car. If I knew where you lived I would have brought it to you! So here it is. And a beautiful watermelon it is too!”

My jaw locked on OPEN, sweat was stinging my eyes and my hands were fist-tight. I was not getting out of that car.

Then the shock came! In her kindest voice this infuriated woman of twenty minutes ago responded, “That’s Ok my dear, we all make mistakes. No problem, at least I have it now!”

Where did the wrath go? The young man placed the box full of watermelon into the car. Then he and my mother stared fondly into the box, admiring the contents.

“It is splendid, isn’t it?” Mother said. “Thank you very much, and enjoy your day!”

Then she hopped into the car. I was utterly speechless. Finally, not being able to stand it anymore, I had to ask her how come her attitude changed so much in so short a period of time.

“In cases like this you have to be prepared,” she explained, giving me the ‘Lessons in Life’ lecture. “You know I would never argue over a $2.99 watermelon. I could have bought another one for heavens’ sake. Whatever is wrong with you? There is no need to be upset!”

She glanced at me and smiled.

I felt like I had just stolen a piece of bubblegum.

Bonnie Jarvis-Lowe is a retired Registered Nurse living in Shoal Harbour, Newfoundland, passionate about photography, writing and her family. She has two grown children and one granddaughter, who all live too far away from her in Alberta. She

writes for local magazines and newspapers, Releasing Times, Medhunters.com, Tidespoint.com, and various writers groups and publications. An anthology of short stories called Up Til Now is available through www.shopdownhomer.com or directly through her. “To share my work gives me a great sense of satisfaction.”
Logging In...