Reprinted by permission of Madeline Leclerc, Editor of La Cataract and the Victoria Star

With a focus on productivity and efficiency, Steve Toner’s company, Timber Top Trusses, which manufactures roof trusses and engineered floor systems, has quadrupled sales since 1998 and started exporting to as far away as Iceland and Spain. For this innovative and growing success story, Steve Toner, 30, a native of Grand Falls, has earned the Business Development Bank of Canada’s (BDC) Young Entrepreneur Award for New Brunswick. 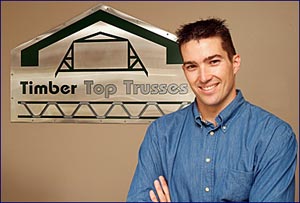 Steve’s father founded Timber Top Trusses 30 years ago to complement his construction, lumber yard and hardware store businesses. Steve purchased Timber Top from his father in 1998, a year after graduating as an engineer from the University of New Brunswick. “My father told me if I wanted to own a truss plant, I had to be an engineer,” stated Steve.

When Steve was a student, his father also insisted that Steve find a summer job selling the competition’s product, an experience that proved invaluable to Steve.

“I got to see how other truss companies were operating and see where major improvements could be made,” he added. “When I bought the company, we became very customer-oriented because 1 knew exactly what our customers needed.”

Timber Top delivers its products to customers, who are mainly lumberyard owners, in two to three weeks, rather than the customary five or six. To keep that schedule as his business grew, Steve opted for lean manufacturing to eliminate bottlenecks and reduce the amount of time that any single piece of wood was manipulated in the plant by 10 times. “We had to be more efficient in the shop in order to be able to deliver within the two to three-week window, beat the competition and charge a premium. Clients are willing to pay a higher price because we’re delivering more quickly than our competition,” explains Steve.

Other innovations Steve has introduced include an online tracking system: Customers simply log on to the company’s website, type in their purchase order number and it brings up the status of their order. “That eliminated a lot of phone calls and allowed us to increase business by 20-30 per cent because our clients could get that information on their own,” adds Steve.

The pressures of rising fuel and insurance costs drove Steve to streamline the manufacturing process even further.

“I was the first truss company to set up laser jigging in the province,” points out Steve. “It was expensive but it increased our efficiencies and doubled, even tripled, our production. Technology and research and development have permitted my business to remain profitable. Had I not invested, I would not be able to remain competitive.”

A highlight of Small Business Week, BDCs Young Entrepreneur Awards recognise the achievements of Canadian businesspeople between the ages of 19 and 35, paying tribute to a young entrepreneur from each province and territory. Winners are chosen by a selection committee, based on a number of criteria that range from operating success and innovation to involvement in the new economy, community work, and export performance. The winners were honoured at a ceremony held recently in Calgary, Alberta, celebrating their accomplishments with the theme: “You’re the power behind the Canadian economy, let’s share the energy!”

Steve plans to continue to expand his business overseas.

“I don’t believe in having all my eggs in one basket,” he explains of his decision to add countries like Germany and Ireland to his existing client base in New England and New Brunswick. “One thing that I am very proud of is to have maintained my ethics,” says Steve. “I’d rather lose money on a deal than lose my integrity as a businessman. For example, our clients like doing business with us because if there’s a problem, we’re there and we’re not scared to solve it. We’re not going to run away from it even if it hurts.”

“That’s 40 families we’re helping to support,” he points out. In addition, he contributes to his community through charitable donations and support for projects such as the building of a new civic centre and the sponsorship of local hockey teams.

“Steve is an example of the best of Canada’s young entrepreneurs,” says BDC President and CEO Jean-René Halde. “The energy and commitment with which he runs his business have resulted in success for himself and generated opportunities for others. He has shown that creativity, passion and dedication make for a powerful combination and drive the Canadian economy.

“It takes patience to be an entrepreneur,” says Steve. “You get 20 ‘no’s’ before you get a ‘yes’ when you’re selling something. In order to be successful, you need to believe in your products, your employees as well as have a positive outlook on the future.