It Takes Courage To Improve Yourself As A Leader

decided to be a leader and a success story.

The six young adults who left the Superdome carrying two sick friends determined to walk to the highway so that their friends could get help. They found a reporter who let them use a cell phone to call their parents, a plan of action was created and they were rescued.

The doctors who were not going to give up, who kept on ministering to others, but made sure that they recharged themselves by meditating and ingesting nutrients.

The young man who is a violinist, who knew he either could give up or serve others by playing music to soothe their souls, he chose the later.

The two men, who lost their homes, could not find their own families but decided that with their boat they could save as many of their neighbours as possible and did.

What did these individuals have in common and what can you learn from their actions?

They were each tossed into disaster and chaos. They had the same issues as everyone else; loss of shelter, food and basic necessities, some lost loved ones. However, they did have something unique, an intense desire to fight, to not give up, gratitude and a willingness to help to be part of the solution.

All too often when I work with individuals and organisations I see more victims than victors. More often than not I encounter work groups that complain about other groups. I see people in leadership positions looking for excuses rather than solutions. I see individuals that have focused on small insignificant problems rather than seeing the bigger issues…often the elephant in the room, and the results are disasters and chaos.

If you are in sales, ask yourself who is the potential customer that you have avoided or have written off? Do you complain there are no leads or that you do not know where to find the leads? I’ve done that. It was easier to complain or be in confusion, (I do not know where to start) rather than to have the courage to ask – point me in the right direction, I am lost right now, or ask for referrals or calling past clients for more business.

In management do you run from meeting to meeting? Are you bored to tears? How productive have the meetings been to you, your team or productivity or profitability? I have sat in meetings that were deadly. I know they were important to the person who organised the meeting, but I could not figure the relevancy to the people present (nor could these people.) Hey, the boss called the meeting they had to attend. Did you have the courage to speak to the organiser, “In the future please tell me why it is relevant to my group and to me?”

Is Powerpoint® being used effectively? How many hours of the day have you wasted sitting in a meeting watching a Powerpoint® presentation that could have been emailed to you beforehand so you can read, learn and then discuss in the meeting? I heard one organisation has FOUR HOUR PowerPoint ® presentations that are read line by line to the audience, in the dark. Are people listening or sleeping? Have the courage to speak up and offer insights to improve the situation. If your in-house presenters are boring and aren’t communicating well you must request that your company INVEST in training for these presenters. You are losing productivity hours, lowering morale, building resentment and losing opportunities to be inventive, creative, proactive and productive. In other words your company is losing money. I want to hear stories from you about your Powerpoint® nightmares (and the best of the best usage of Powerpoint®). 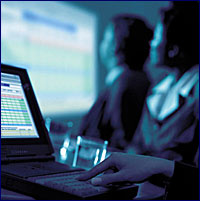 The Foreign Affairs Department of the US Army and Foreign Affairs divisions in military departments around the world are very aware of the importance of long-term relationships. They have institutionalised the foreign affairs divisions so students can attend college with each other and study together in different schools around the world. When students, who have an interest in international affairs, are encouraged to study abroad at local colleges and universities they learn and socialise together building the framework for long-term friendships. Long after they complete school friends keep in touch with holiday cards, visits to each other’s homeland and phone calls. Many times these informal relationships have averted catastrophe and chaos among governments.

In the business world long-term relationships forged early on continue to be critical to the success and leadership of individuals and corporations. This week it only took a phone call to a friend to offer help during this current Katrina disaster. A 20-year friendship between the CEO of Children’s Mercy Hospital, Randall L. O’Donnell, and Steve Worley, the CEO of the New Orleans children’s hospital enabled 25 children to be air-transported to safety without the need for protocol and procedure, saving the children’s lives.

Are You Prepared To Have Courage And Be A Leader?

When I was a young girl my mother used to play a game with my brother and me. It usually was done on a long drive. She would say, “I trust you and know that if I told you to meet me in Japan at 12 in the afternoon 3 months from now you will be there.” My brother and I would then spend a long time quiet in the car or at home thinking and scheming of ways that we would get there. We were creating an adventure movie in our minds. We knew we would be there we just had to figure out how. As I got older she would still play the game. When I lived in Spain during the turmoil of Franco’s death, riots broke out and I was left homeless due to some unfortunate accident. I remembered the game and was able to take charge and take action (Thanks Mom).

How about you? When you fly do you take a few moments to think what your plan is in case of an emergency? When you attend a conference do you scan the room for the emergency exits? Do you see ways to move people efficiently should there be a crisis? When the boss leaves and you are in charge do you know the action plan in case of an emergency? Are you confident and clear of the mission and goals of your department and organisation so that you won’t be pulled in the wrong direction?

Have you ever asked yourself what do I need to do to build up my courage and be a leader? Not just read about how to be a leader but actually take the actions to BE a leader. BEING requires action. What actions are you taking right now?

Quotes of the Month:

“The closer you get to achieving your goal the stronger the forces pulling you away become, the louder your brain protests, and the more urgently you want to revert to old patterns.”

“It is OK to feel bad, Just don’t let it stop you. You’ve got to be willing to be uncomfortable.”

Moral excellence comes about as a result of habit. We become just by doing just acts, temperate by doing temperate acts, brave by doing brave acts.

The important thing is this: To be able at any moment to sacrifice what we are for what we could become.

Here are some courageous acts that you can begin to practice today:

* Time your chats and sales calls. Have a timer on your desk. When someone comes into ‘chat’ you can let them know that you can allocate five minutes now or speak at lunch. If you allocate five minutes (three or two) set the timer. When the timer rings conversation ends. This also works well with salespeople. If you ask a client on the phone, “I will only take five minutes of your time, is that okay?” and they agree, then set your timer. When the buzzer rings say, “My five minutes are up. Do you want me to continue or set up a more convenient time?” HONOUR THEIR TIME and they will respect you as a person and sales professional.

* When a mistake is made…own up to it. If you know you burned the coffeepot, own up and get a new one. If you exaggerate and want to change yourself then own up to the exaggeration and apologise. I used to exaggerate all of the time and I wanted to change. It took a very long time of me saying, “Sorry, what really happened was . . .” Or, “I made that up.” It was painful but every time I owned up I felt better about myself and more confident that my truth was okay. I never said change was easy only that you needed courage.

* List five actions you would take if you had the courage to take them.

* List the worst case scenarios for each action. What do you think would be the worst thing that could happen if you took that action?

* If the worst thing happened could you survive?

* If you could survive would you be able to make a new life?

* Decide which actions you will take, thus taking your first action step, deciding.

* Asking for a raise

* Playing air guitar or dancing alone, with energy (yes, this means you guys too!)

* Cutting up your credit cards

* Laughing out loud at work

* Driving your car without any distractions (no phone, no radio, no eating, and no reading), It takes courage because everything is calling our attention and we must say no.

Pegine’s Thought of the Month:

“There is daydreaming and then there is COURAGE-dreaming which is using the power of your imagination to SEE yourself scaling high walls, reaching the top and getting to the other side. Preparation for anything BIG begins with achieving it first in your dreams by dreaming with COURAGE.” ~Pegine Echevarria, MSW

Magazines describe Pegine as one of the top motivational success and leadership experts with business and team building experience! Her teambuilding and motivational programs are experiential, fun and filled with content. Companies use her to motivate people, develop strong leaders & teams, and increase productivity. For more success, leadership and team building information visit her website at www.pegine.com.