Miramichi-based courier Denis Comeau says he has delivered just about everything over the past seven years through his inter-city delivery service, Denis Pickup and Delivery. 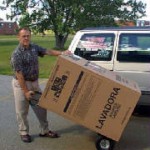 Formerly a brush cutter and thinner, Comeau decided to make a career move after becoming tired of seasonal work. After much deliberation and consultation with his family, he decided to take advantage of his outgoing personality and love of people to join the delivery trade.

There were no job openings with area couriers at the time, so Denis became an entrepreneur and started his own service. He and his wife, Betty-Ann, examined the market and decided the open niche was for a smaller scale operation offering point-to-point delivery within the immediate area of Miramichi.

Looking back, Denis considers his career move a gamble but is happy he took the risk.

“Even though I’ve been in business for seven years, I’m never bored with my job and wake up excited to face the day,” states Comeau. “If you have a goal in life, go for it. To be an entrepreneur, you have to be a little crazy.”

Comeau began his business by offering some elderly people in his neighbourhood a hand with their errands around town. He then expanded his service to local businesses and organisations, to provide full-time, bilingual inter-city delivery.

To insure reliable service, the family car was traded for a mini-van, and Denis invested in a cell phone so he could be reached at any time. Being a family man, Denis’ two children, Sebastien, 13, and Josée, 18, often accompany their father on his delivery route when not in school.

Having been voted “Courier of the Year” through the local newspaper two years running, Denis says he can’t imagine living or working in any other city, but confesses it has obstacles.

“Doing business on the Miramichi is challenging because the market is always changing and you never know what to expect from day to day,” explains Comeau. “However, Miramichi is a great place to work, live and raise a family.”

Aside from his usual services of medical and prescription, small office and commercial moves, bank deposits, and special occasion deliveries, Comeau’s company was recently certified in the transportation of dangerous goods, including blood specimen collection.

Comeau says this service accommodates the elderly and shut-ins who have blood samples to deliver to medical facilities on an ongoing basis. Comeau picks up the specimen at the house and takes it to the lab in cooler storage, located in his van. Anyone requiring this service can call Denis to arrange a price based on location and frequency of pick-up.

Denis thanks his valued customers over the past seven years, and looks forward to doing business in the future as Miramichi continues to grow and prosper.