On the corner of Prince William Street and the King George Highway stands the old stone building where Miramichi justice was once dispensed. The rooms and halls echo empty silence now, and nobody 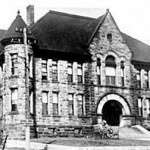 knows how much longer that may be the case.

Ross serves on a committee with a group of Miramichiers who are working together to guarantee a future for the historic old building.

The fate of the Courthouse hasn’t been decided, but the Miramichi Courthouse Preservation Committee wants to ensure it doesn’t get torn down.

“It’s a prominent building with a great history in a fantastic location,” Bob says. “But it costs money to keep an empty building.”

He adds that old buildings often get torn down due to a lack of community interest and action.

“People have ideas but they don’t organise and often don’t support a focus committee,” he says. “It isn’t until after the buildings are lost that they strongly voice their displeasure.”

The Miramichi group doesn’t want that to happen with the Courthouse. They’re making sure the provincial government gets the message that they are prepared to assist in any way possible right now.

The committee consists of 15 people who have expressed an interest in preserving the courthouse and ensuring that the community has some say in its future use. They would like to see the building become a place for everybody in the community to use and enjoy.

The provincial government is currently putting together a package that will include all the details like the cost of running the building, its dimensions, pictures, etc.

After the package is completed and made available to potential investors, sponsors and others who might be interested in helping to develop the property, the committee hopes to be involved in deciding the future use of the building.

They hope to see a commitment from the community rather than having to seek developers outside the area.

Ross hopes if a good use is found for the building the city, provincial government and even the Federal government might have funding for the project.

He urges the community to let the committee know if they have ideas but stresses that they are not looking for “you should do this” type suggestions. He says they’re looking for people who have feasible ideas and are willing to invest their own time, money and skills.

“The local committee is trying to make sure that there is local input in the future use of the courthouse – that some of our ideas are accepted and implemented.”

Many of the ideas on the table have an art gallery or museum aspect to them.

Once the committee has the package, they’ll be heavily involved encouraging prospective investors and developers to obtain the package – making sure that local people who have an interest are included.

Contact the committee with your sustainable ideas by calling Chairman, Nelson Stewart at 622-3078 or Bob Ross at 627-4456.

Kellie Underhill is the editor of Bread ‘n Molasses. Her writing credits include The Moncton Times-Transcript, The Brunswick Business Journal, The Atlantic Chamber Journal and The Reader magazine. Send comments about this article to editor@breadnmolasses.com.