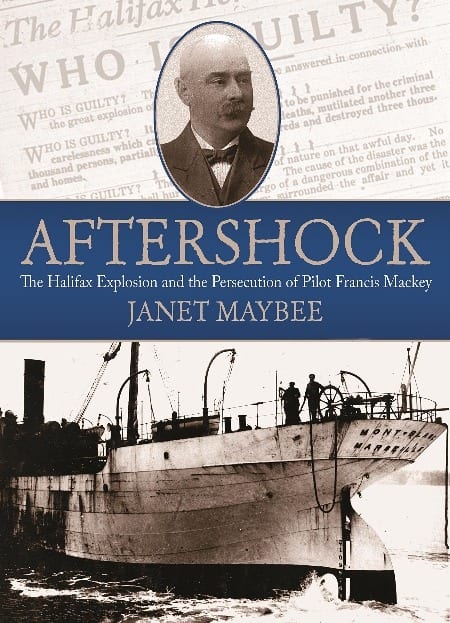 Aftershock, a 2015 book published by Nimbus is an essential read for those interested in the Halifax Explosion of December 6th, 1917. It was on this date that one of the biggest explosions up to that time in North America occurred in Halifax harbour killing thousands and leaving many more injured and scarred for life.

However, as the author states in the preface: “This is not a Halifax Explosion report. There are many excellent records, some written by people who were present that day.” This book was written to clear the name of pilot Francis Mackey who was the pilot on board the Mont Blanc when it collided with the Imo.

For almost one hundred years, Pilot Mackey remains in the public’s consciousness as the one man responsible for that fateful incident. Ms. Maybee clearly shows that more than anything, Mackey was made to be a scapegoat, diverting blame and attention away from the federal government and the fledgling Canadian Navy.

“Highly recommend based on the authoritative research done by Ms. Maybee and her logical presentation of the facts surrounding Pilot Francis Mackey and the Halifax Explosion.”

Ms.Maybee is a research associate at the Maritime Museum of the Atlantic and has made extensive searches of the archives (in Halifax and Ottawa) for facts pertaining to the case. She has interviewed surviving Mackey family members and this fine book includes photographs and maps. The maps are excellent for showing the course of the two vessels as well as the areas of Halifax that were most affected by the blast. I applaud her for including them, for I experience a sense of dissatisfaction when a book about a particular area doesn’t include a helpful map (even a simple hand drawn one) to guide the reader to places mentioned in the text.

The book is well laid out, consisting of eight chapters bookended by an Introduction (“Intrigued“) and a Conclusion (“Chances“). Indeed, it was by chance that the author discovered her own personal connection to the Mackey saga when she learned that the Halifax house she bought in 2007 was once lived in by Mackey’s second wife after he passed away. This led to her being intrigued to learn more about Pilot Mackey and to try to exonerate him from blame once and for all. There is also a bibliography if you are interested in reading more about the Halifax Explosion itself.

I really enjoyed reading this book, since it looked at the Explosion from a different angle and it centres, not so much on the tragic incident itself, but on the major characters involved and the back-room politics in Ottawa that kept the cloud of guilt hanging over Mackey’s head long after several courts had cleared him of any wrongdoing. Highly recommend based on the authoritative research done by Ms. Maybee and her logical presentation of the facts surrounding Pilot Francis Mackey and the Halifax Explosion.

This review of Aftershock is written by James M. Fisher, The Miramichi Reader. James M. Fisher lives in Miramichi. James is an ardent reader whose aim is to highlight New Brunswick authors and publishers, as well as cover subjects of interest to New Brunswickers in particular and Maritimers in general. For more visit his website or like his page on Facebook.