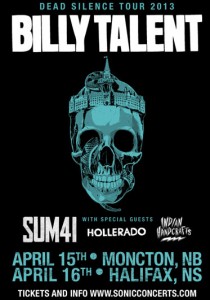 Billy Talent with special guests Sum 41, Hollerado and Indian Handcrafts will perform on April 15th, 2013 at the casino.

Tickets are $49.28 in advance and $51.78 on the day of show (including tax and service charge) and will be available at the Casino Gift Shop, by phone at 1-866-943-8849 and online at www.sonicconcerts.com. Delivery fees may apply. This show is general admission, standing room only and open to all ages with a licensed area for those 19+ with valid ID. Doors open at 7 pm.

If you’ve seen the video on YouTube, you can’t help but marvel at the sight of over 100,000 fans singing along to “Viking Death March,” the first track released to the public from Billy Talent’s fourth album, Dead Silence. Watching the mass celebration of this song is powerful enough but the fact that the track had only been released days before the band hit the stage at the Rock Am Ring festival in Germany is testament to the loyalty of the band’s fans around the world.

Dead Silence is the follow up to Billy Talent I, II and III and was recorded in three different studios in Toronto, Vancouver and Los Angeles. The album was produced by Billy Talent guitarist Ian D’Sa and is perfect proof for Billy Talent’s inner strength, their focus and hard work ethic; character traits that have turned them into one of the most successful international rock acts of the past decade.

Being together for almost 20 years and having travelled thousands of miles in vans, buses and planes turned the four piece not just into a band, but into a family — a tight brotherhood that will challenge and tackle any obstacle in front of them. Equipped with countless awards (such as multiple MuchMusic Awards, Juno Awards, MTV Awards and even two of those rare German Echo Awards) and having played the biggest festival stages worldwide, Billy Talent are ready to take on their next mission: to complete their world domination.

When Billy Talent started their adventurous journey into what would become Dead Silence, all they knew was that they wanted to record an album in the traditional sense of the word — a collection of songs that all tie in with each other, a journey through ups and downs, highs and lows, hope and decay, love and disgust, joy and sadness. An album that has a start, a finish and everything in between thus “represents all aspects of life basically,” says singer Ben Kowalewicz. They are 14 songs, as straight from the heart, intense and intuitive as previous milestones like “Try Honesty”, “River Below” or “Red Flag” and as unwilling to compromise or give in. It was a long, winding and bumpy road Billy Talent had to take in order to turn Dead Silence into what it is today: a tour de force rock album.