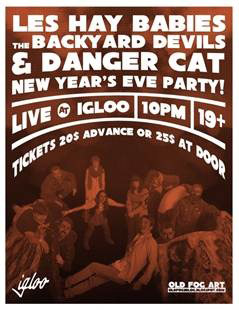 The BackYard Devils, Les Hay Babies and Danger Cat, with a special surprise guest, are hosting a spectacular show for New Year’s Eve at Moncton’s Igloo (300 Elmwood Drive). Doors will open at 9 PM. Tickets are sold in advance at the Igloo at the price of $20 and will be $25 at the door.

The BackYard Devils
Fancy isn’t a word often heard in Eastern Canada and there is nothing fancy about The BackYard Devils. They’re simply playing the music they love. Their debut album is a well-blended mix of dirty country, rockabilly and bluegrass. With a swinging guitar rhythm, doghouse bass slaps, smashing guitar solos and lightning quick banjo and mandolin lines, The BackYard Devils managed to hammer down their own sound in an old-fashioned style. The band’s first album was released in May 2011.

Les Hay Babies
Les Hay Babies craft a colourful folky music filled with sensibility and modernity. The young women from little New Brunswick villages will carry you into their world with the warmth of their harmonies. They create moving melodies with only a guitar, a banjo and a ukulele. Even though the band has been created less than a year ago, they already have a name for themselves. Les Hay Babies shared the stage with Motorleague, The Novaks, The Backyard Devils and Les Paiens. They released The Folio EP in July 2012.

Danger Cat
Danger Cat is made of four high school friends: Olivier Landry, Nic LeBlanc, Matt LeBlanc and Marc-André Belliveau. Their influences are stretching from classic to modern rock, while managing to grasp the essence while creating a sound of their own. Their career as ‘Danger Cat’ started on Archibald Street in Moncton at a house venue known as ‘‘La Patente’’ in the beginning of March of 2012. Since then they have played at many of the top venues in Moncton and New Brunswick while sharing the stage with bands such as The Novaks, Gloryhound, The North Lakes and many more. They released The Danger Cat EP in October 2012.