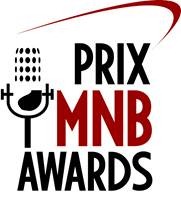 MNB Week 2012, concluded this evening with the annual MNB Awards on Sunday October 14. The awards were presented to musicians as well as music industry professionals who have distinguished themselves during the past year as part of a gala event at the Crowne Plaza in Moncton. Hosted by poet and musician Gabriel Robichaud, the awards were a great conclusion to a successful Music NB Week that took place from October 11-14.

MNB Executive Director, Jean Surette is pleased with the progress of the MNB Week since the resurgence of the event, three years ago, “We have noticed that there was an increase in the public attendance to the showcases likely due to an additional venue this year. The public came out every night and we are definitely happy with the turn out. Even the participation in the conferences and workshops has increased compared to 2011 and we were already proud of last year’s numbers. All in all, we are satisfied with this year’s MNB Week and this bodes well for 2013.”

2012 Winners
Prizes were handed out in 28 categories awarding not only musicians, but also visual artists, educators, venues, festivals and professionals working in the NB music industry. The winners were selected by MNB members’ votes (50%), a jury vote (25%), and the general public (25%).

About Music NB
Music/Musique NB (MNB) is a provincial music industry association that provides a support network for musicians, managers, and businesses that are involved in the creation of music within the province of New Brunswick. MNB is a non-profit bilingual association with ties on regional, provincial, and national levels with government agencies and departments who enable us to lobby, promote our industry, and our artists whenever possible. MNB’s primary responsibility is to represent the interests of its members and foster the New Brunswick music industry.