Opening on All Hallows’ Eve, Hubcity Theatre performs the hair-raising, blood-curdling, skin-crawling vampire play: Dracula. It is to be an evening rich in horror, a play described by critics as a play for people that like their coffee strong. Prepare to be quaked delightedly, shocked supernaturally, and thrilled satisfactorily!

Tickets are on sale now for Dracula on stage at the Empress Theatre in Moncton at 7pm on October 31st, November 1st and November 2nd. Tickets are $25 and can be purchased at the Capitol Theatre online at www.capitol.nb.ca.

After six years of theatre productions, Hubcity Theatre has been fully embraced by Moncton audiences. Their 2011-2012 season concluded with A Midsummer Night’s Dream, which was taken on the road to Moncton’s neighbouring town, Sackville. They were accepted in Sackville with open arms, but were tremendously touched by the warm welcome and roaring applause the swelling Moncton crowds offered so eagerly. It was nice to come home. 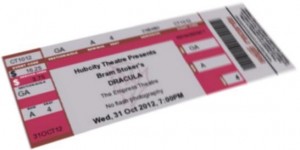 Their 2012-2013 season is underway with the chilling tale of Dracula, and will end in July with an even-more-expansive production of Shakespeare in the Park! Keep an eye out for more theatre opportunities in-between.

Hubcity Theatre was founded in early 2007 in Moncton, NB. Its founding principles were seeded deeply in passion for the arts, specifically theatre. The members of the early Hubcity Theatre were dedicated to sharpening their artistic skills and working with others of similar drive, a tradition which has been continued to date. The players dedicated themselves to entertaining Moncton in a unique and fresh manner. Since then, each play production has striven to build on the last and to develop the skills of each individual person involved– actor, director, crew, and all.

Hubcity Theatre’s primary focus has been good quality plays with strong, solid acting. The Company has worked hard to bring theatre to many different locations in the Greater Moncton Area, performing on Main Street, Victoria Park, the Moncton Market, the Aberdeen Cultural Centre, the Capitol Theatre Empress, and Sommet Park.

Join them on Facebook or email hubcitytheatre@gmail.com for further information.