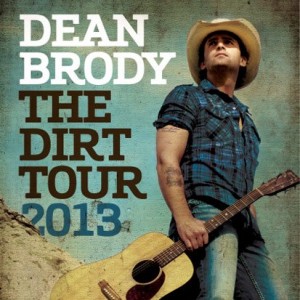 Newly crowned as Male Artist of Year and awarded Album of Year for the second consecutive time at the 2012 Canadian Country Music Association Awards (CCMA), Dean Brody will perform at The Playhouse in Fredericton on Monday, February 18 and The Capitol Theatre in Moncton on Tuesday, February 19.

After the breakout success of his 2011 CCMA Award winning and JUNO nominated sophomore album Trail In Life, Brody has returned in 2012 with his third studio album, Dirt. Released in April, the album debuted at #1 on the Canadian Country charts. The first single, “Canadian Girls,” dominated Country radio becoming a certified Gold and #1 SOCAN hit. The success of “Canadian Girls,” has brought Brody to the forefront of audiences; being featured on Degrassi – The Next Generation, performing at CBC’s Fall Season Preview, CBC’s Stampede 100! and the CFL’s Labour Day Rematch between rivals Edmonton Eskimos and Calgary Stampeders.

Named 2011’s #1 Most Played Canadian Country Artist in radio and awarded with three 2011 CCMA Awards (Single of the Year, Songwriter of the Year and Album of the Year), Brody has come into his own as a performer completing multiple sold out dates on 2011’s CMT Hitlist Tour with Aaron Lines and Deric Ruttan and touring extensively on the summer festival circuit.

To date, Brody has charted nine Top 10 singles, including his #1 single “Canadian Girls”, #2 hit “Bob Marley” and four additional Top 10 songs (“Roll That Barrel Out”, “Trail in Life,” “People Know You By Your First Name,” “Little Yellow Blanket”). His third single from Dirt, “It’s Friday” featuring Great Big Sea, was serviced to radio on September 7 and the video was shot in St. John’s, Newfoundland with Great Big Sea at the end of August.

Dean Brody’s headlining tour begins January 25, 2013 in his native province of British Columbia and moves throughout the country, finishing in his hometown of Halifax, Nova Scotia on February 23, 2013.

For for the latest news and ticket information visit www.deanbrody.com Join the conversation on Twitter by tweeting hashtag #TheDirtTour2013.