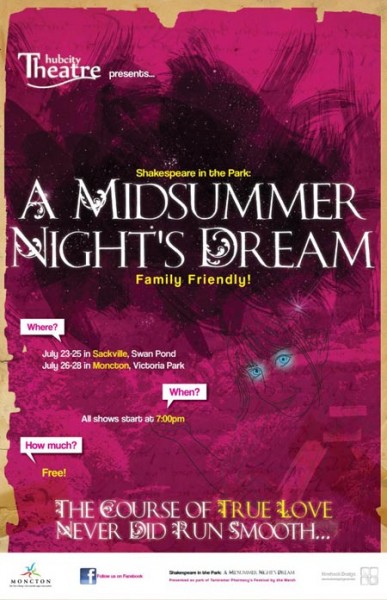 This year’s production of A Midsummer Night’s Dream is one of Shakespeare’s most delightful comedies. Hubcity Theatre’s rendition is family friendly and will take place July 23, 24 and 25 at the Swan Pond in Sackville, NB – as part of the Tantramar Pharmacy’s Festival by the Marsh. The play then moves to Victoria Park in Moncton on July 26, 27 and 28.

Admission is free and all shows start at 7 pm. This year, the show is going mobile, and scenes of the play will take place at different locations throughout the park. All are encouraged to bring a lawn chair or a blanket.

Shakespeare in the Park is a tradition carried over from Shakespeare’s stomping grounds to ours. Many cities around Canada have developed their own Shakespearean festivals, from Victoria, BC, and Stratford, ON, to Halifax, NS, and now Hubcity Theatre brings it to the Great Moncton Area.

The idea is to offer free, open-air theatre to the local community. The works of Shakespeare appeal to all manner of people, young and old, men and women, children and adults, poor and rich. Everyone can find some personal thing to pull out of a Shakespeare production, something to relate to. It is with this belief that Hubcity Theatre performs the bard’s plays. It’s about real people, struggling with real problems.

Hubcity Theatre was founded in early 2007 in Moncton, NB. Its founding principles were seeded deeply in passion for the arts, specifically theatre. The members of the early Hubcity Theatre were dedicated to sharpening their artistic skills and working with others of similar drive, a tradition which has been continued to date. The players dedicated themselves to entertaining Moncton in a unique and fresh manner. Since then, each play production has striven to build on the last and to develop the skills of each individual person involved– actor, director, crew, and all.

Hubcity Theatre’s primary focus has been good quality plays with strong, solid acting. The Company has worked hard to bring theatre to many different locations in the Greater Moncton Area, performing on Main Street, Victoria Park, the Moncton Market, the Aberdeen Cultural Centre, the Capitol Theatre Empress, and Sommet Park.

Join us on Facebook or email hubcitytheatre@gmail.com for further information.