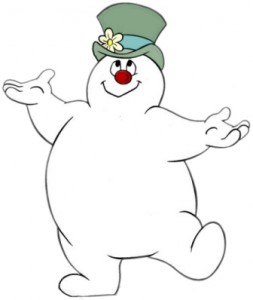 I have celebrated many special Christmas holidays, but I will always remember the Christmas of 1946. I was seven years old and it was my last year of childhood innocence, although I didn’t know it at the time. I believed in Santa, the tooth fairy and magical, dancing snowmen.

It was the morning before Christmas and I had awakened early to the delicious smells of gingerbread cookies and pumpkin pie. I was dreaming of the baseball mitt Santa had promised to bring me. I really wanted a mitt although my old fashioned mother insisted that Santa didn’t bring boys’ toys to little girls.

As I lay in my bed I was filled with the magic of Christmas. I could barely contain my excitement. Suddenly, I heard the most beautiful music coming from the front lawn.

I peered thru the window and to my amazement I saw an incredible sight. A snowman was singing and dancing on the front lawn. He wore a bright red vest and a floppy, green hat fringed with mistletoe. Underneath one arm he held a gray baseball bat.

The snowman saw me staring. He tipped his hat and did a little dance.

He answered,” Too big to dance with me.”

“I’m coming down,” I shouted, as I leaped from my bed.

I quickly put on my blue flannel robe and my open-toed slippers. I raced down the stairs and flew out the door.

The jolly snowman welcomed me with a Christmas song and we began to dance around the evergreen trees. Sometimes we sang together in harmony.

The sun was shining brightly on this winter day and I could see my toe prints all around the soft white snow. Soon we grew tired, at least I did. I sat on the fluffy white snow and tried to catch snowflakes as the snowman sang a song while twirling his baseball bat.

“Would you like to play some baseball now?” he asked.

I wondered how he knew that I loved baseball.

I pitched several snowballs to him and he hit several balls over the neighbour’s fence. This magical snowman was quite good. He then began to run the bases. I jumped up and down applauding his style as he slid toward my front door mat which was home plate. We were having so much fun.

The snowman then turned to me and said, “Soon I will have to leave because the sun is beating down, but I hope to return to this wonderful little village next year. I don’t like goodbyes so please return to your room and go back to bed.”

My new found friend then handed me a spray of mistletoe from his hat.

“Have a wonderful and magical Christmas,” he said.

“Can we dance again when you come back next year?” I asked.

“Too big,” I kept repeating to myself as I walked to the kitchen to snatch a freshly baked cookie.

“Were you playing outdoors in your bathrobe?” my mother asked.

“Not exactly Mama, I was dancing with a snowman.”

My mother smiled. “You have quite an imagination. It must be Christmas fever. Now hurry and get dressed for breakfast.”

I never mentioned the snowman again, but I never forgot him.

Sometime between my seventh and eighth year my older brother told me there was no Santa, and no tooth fairy, but he couldn’t destroy my vision of the dancing snowman. The mistletoe that I had pressed between the pages of my school reader reminded me of that magical morning.

The following Christmas the weather was warmer than usual. We had no snow.

Santa was not coming and my world of make believe was over. I was growing up.

I never saw my dancing friend again. I was just too big.

Leave a comment on this post and you’ll be entered to win a signed copy of Miramichi author, Doug Underhill’s latest book entitled Salmon Country. We’ll draw one winner from everyone who comments on any of our special holiday themed posts for our annual Twelve Days of Christmas event!