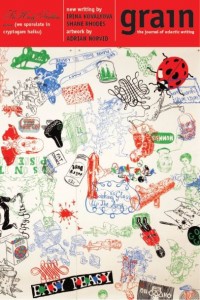 Grain Magazine‘s 23rd Annual Short Grain (with Variations) Writing Contest, is accepting entries until April 1, 2011 (postmarked). Grain awards $4,500 in cash prizes! The entry fee is $35 which includes a free one-year subscription to Grain Magazine! The contest’s judges are counted among Canada’s finest writers. One entry fee allows you to enter a maximum of two entries in either of two categories: poetry in any form to a maximum of 100 lines; and short fiction in any style to a maximum of 2500 words.

Whose company do you want your writing to keep? Grain, the journal of eclectic writing, is the hottest, sexiest, most exciting literary magazine on the Canadian and international scene… the one that everyone wants to be published in! Recent issues have featured the work of such literary luminaries as Xi Chuan, Tim Lilburn, Guy Maddin, Miriam Toews, and Eleanor Wachtel. This year’s contest judges, Zsuzsi Gartner (short fiction) and Jeramy Dodds (poetry), are rising literary stars… with impeccable taste.

About the contest judges:

Jeramy Dodds’ debut poetry collection, Crabwise to the Hounds (Coach House Books, 2008), received the 2009 Trillium Book Award for Poetry, and was shortlisted for both the 2009 Gerald Lampert Award and the 2009 Griffin Poetry Prize. He received the 2006 Bronwen Wallace Memorial Award and won the 2007 CBC Literary Award for poetry.

Zsuzsi Gartner’s short story collection is All the Anxious Girls on Earth. She is the editor of Darwin’s Bastards: Astounding Tales From Tomorrow (D&M, 2010) and fiction editor for Vancouver Review. The winner of a 2007 National Magazine Award for Fiction, her eagerly anticipated new story collection, Better Living Through Plastic Explosives, will be published in early 2011.