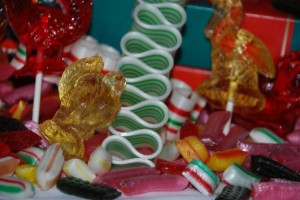 As every Christmas season arrives it brings back fond memories of my younger years during World War II when my dad and uncle were overseas. My family at home, Grammie, Mom and Aunt Kitty loved my sister and me so much—although I can’t remember any hugs, the love was there.

On Christmas Eve those long brown itchy stockings were hung up on the wall and we knew Santa would fill them to the top.

Christmas mornings were such a happy occasion. We each found an orange in the toe of our stockings, along with ribbon candy, barley toys and nuts galore! Crayons, colouring books, and paper dolls were some of the other gifts, along with handmade knitted mittens, socks, caps and a sweater. A new pair of winter boots and a snowsuit would likely be included if needed.

A toboggan was really THE gift! It wasn’t too long before my sister and I would be all decked out to go outside and have fun with it.

Of course we didn’t get “new” clothing every year. Grammie would hand-make lots of our clothes from used clothing (guess whose!)

My sister and I must have been the happiest kids in our community. While we were joyfully playing with our gifts on Christmas morning, Grammie, Mom and Aunt Kitty would be out in the kitchen preparing Christmas dinner. Now let me tell you that in our home it was DINNER! Even though times were tough during the war from 1939 to 1945, we always had lots to eat in the wintertime as well as the rest of the year. They planted a huge garden in our large backyard of potatoes, carrots, turnips, parsnips, peas, beans, and you name it!

The pantry was the place to see all those bottles of jam, jelly, mustard pickles, beets, etc. As I recall these goodies I am sitting here drooling! And not only that, I remember the brown molasses bread with raisins that Grammie made—just a moment now, I’ve got to get my hanky and dry up my drool!

Now Grammie as she was growing up did not have the opportunity of going to school, but was she ever a wise sensible woman! And don’t anyone try to differ with me, but she was the BEST cook in New Brunswick! When baking cakes, cookies and whatever, it was a pinch of salt, two pinches of baking powder, a couple of handfuls of flour and so on. Everything turned out perfectly!

In those days we didn’t have hydro in our neck of the woods, as the saying goes. We used oil lamps at night in the winter. We burned wood in the kitchen stove. In the living room we had a “Quebec Heater” in which we burned some wood and coal. Those two were the only source of heat in our house. In every bedroom upstairs, there was a round hole in one of the corners and each was surrounded by cement so that when the pipes were put up through in the winter, the floors would not catch fire when the pipes got hot. We were kept warm and cozy during the long cold winter nights!

We didn’t have indoor toilet facilities but I do recall the white chamber pot with a cover that did the trick for us kids. For the adults there was an outhouse decorated with Murescoed walls, oilcloth on the seats and the Eaton’s catalogue. That little place was kept neat and tidy, no smells! That Grammie, didn’t I just say that she was a wise and sensible woman?

Now back to Christmas again …

I remember one Christmas Eve in particular, my sister and I were bathed and tucked into bed. This was done relatively early so that Grammie, Mom and Aunt Kitty could get the tree put up and trimmed. My sister and I were so excited, we just could not get to sleep! We thought if we stayed awake we just might be able to hear the reindeer on our roof later.

Mom and Aunt Kitty walked two miles to Midnight Mass in Dalhousie. On their way home they stopped in at the neighbour’s place where they had left our gifts (for safe keeping, of course!) When they arrived home we heard them talking softly and giggling. Us girls just had to find out what they were doing. So guess what! We got out of bed, laid on our tummies at the top of the stairs and looked down into the living room, and guess what we saw—Mom and Aunt Kitty were holding a walking doll by the arms and pulling it ahead to make it walk. They had a great time walking the doll! And guess what again! I had asked that Santa would bring me a walking doll!

Well, my sister and I sneaked back to our bed very quietly and we had a serious discussion about you know who. Can you imagine two very young children having THAT discussion! Well, we decided right there that we would keep what we learned about you know who to ourselves. We loved our grammie, Mom and Aunt Kitty so much that we didn’t want to put them in such an awkward position to have to try to explain. When we got into our teens we told them and did we have a great laugh!

Life was so wonderful for me and family. As I look back into my foggy memory I thank my heavenly Father for having given me such a wonderful grammie, mom and aunt who loved me so much. I miss them because they are all deceased now, but they have left me a person who God wanted me to be. Most of all I thank God for sending his son to earth and whose birthday I celebrate each year with a greater love than I had the year before.

May each one who reads this be truly blessed this Christmas!