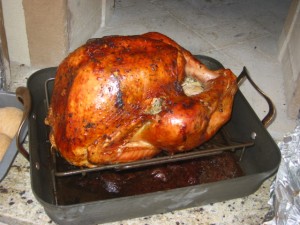 The year was December 24th, 1952. My father, Uncle Joe and I were standing outside of Mama’s hospital room discussing Christmas dinner. We had always upheld certain traditions during the Christmas holidays. Til this day the smells of Christmas dinner fill me with delight …

I loved the Christmas holidays. The scent of mistletoe and holly filled our small apartment with the fragrances of love.  The small artificial tree stood in a corner of the room strung with popcorn and family ornaments. I was too old to believe in Santa Claus so the family usually exchanged gifts after attending Church on Christmas Eve.

Mama usually awakened early Christmas morning.  She stuffed the large turkey at 6am and placed it in the oven to cook all day. Then she prepared the side dishes, mashed potatoes, cranberry salad, home baked buns and her special peach cobbler for dessert.

Mama would not be cooking Christmas dinner in 1952 because had suffered an accident and was in the hospital recovering from leg surgery. She had slipped on the doormat near the entrance to our apartment and had broken her leg in three places. The surgery went well, but the doctor said that Mama would have to be off her leg for six weeks. The good news was that she could come home Christmas day.

Papa and I were thankful that Mama was coming home. We postponed opening the gifts until she could join us. The main problem was our traditional dinner.

Papa had purchased the turkey early in the week. He said that the two of us would prepare Christmas dinner together and surprise Mama.

Seven o’clock on Christmas morning Papa received a call from my mother. She said the hospital was going to release her early and asked if Papa could come soon.

“I think I can make the turkey,” I said. “I’ve watched Mama every year since I was a little kid. You pick up Mama and leave everything to me.”

Papa was helpless in the kitchen and only too happy to allow me to take charge of dinner while he went to the hospital.

As soon as Papa walked out the door I removed the turkey from the freezer. I washed it as I had seen my mother do each year. I then toasted two loafs of bread and soaked them in a small amount of water. Next I added onions, green peepers and celery to the wet toast. Papa and I had diced the vegetables the night before.

Then I opened the legs of the turkey to put the stuffing inside, but the legs wouldn’t budge.  I couldn’t find an opening in the turkey.

I was frantic and immediately called Uncle Joe.

“Hi, this is Jenna.  I have a problem. I am trying to stuff the turkey but there is no opening.”

Uncle Joe tried not to laugh. “There has to be an opening Jenna.. Look again.”

“There is a slight opening, but it is not large enough to put anything inside.”

“Well put whatever you can into the opening and put the rest on the top of the turkey.”

I did as I was told.  I placed some of the dressing on the top of the turkey, but I still had three-fourth of the stuffing left in the bowl. I just spooned it around the turkey and placed it in the oven.

“Uncle Joe, this is Jenna again. At what temperature do I set the oven?”

“Jenna I ‘m not sure. I never made a turkey.  I’d guess at about 250 degrees since it cooks all day.

Whew! At last the turkey was ready to cook.

I peeled and boiled some little red potatoes and broke apart a head of lettuce placing it in a large salad bowl. I added tomatoes and cucumber and little bread cubes. Uncle Joe had promised to bring fresh rolls. Thank goodness I was almost finished. I wiped my sweating brow and sat on the sofa to watch TV for a while. All that was left was dessert. I was proud of my accomplishments and looking forward to our traditional dinner.

After watching a few Christmas showsI began to prepare dessert. Since I had no idea how to make peach cobbler I decided we would have graham cracker sandwiches, I had learned to make them during my Girl Scout days. I turned the fire up on the gas stove and roasted the marshmallows. I carefully positioned them with pieces of chocolate between the crackers. Of course I sampled a few just to make sure they were as tasty as I had remembered. Dinner was now complete.

I placed Mama’s festive red and green cloth on the table and set the table with her fine china.  This was going to be a great Christmas after all.

Papa and Mama arrived home around one o’clock.  She looked exhausted and Papa wore his angry expression. He was annoyed at the length of time it had taken to get Mama released from the hospital.

“Everyone just sit-down and relax. We are going to have a wonderful dinner.  I did everything just as I watched you do in past years.

Mama beamed with pride. This couldn’t have been an easy task for a 12 year old who had never prepared anything but peanut butter and jelly sandwiches.  She had to admit the apartment smelled wonderful.

At three o’clock Uncle Joe arrived and he helped me take out the turkey. It smelled good but it didn’t look done. Uncle Joe tried to cut the turkey but it was solid. The knife would barely go through the skin.

“Maybe if we take out the stuffing it will be easier,” I said. I began to spoon the stuffing out but there was hardly enough to fill a small bowl. I tried reaching further inside but something was blocking the spoon. I put my hand inside and pulled out a bag. “Ugh what’s this?” I asked.

Uncle Joe could barely contain his laughter. “ Jenna you were supposed to remove the bag of giblets and the neck.”

“Oh no,” I murmured trying to hold back the tears that were welling up in my eyes.

“This turkey is still cold inside.  The oven must be broken. Now what will we do for dinner?”

Then he noticed the expressions on our faces.

“Dinner is salad, rolls and over cooked potatoes. The turkey is still cold.” I was still trying to hold back my tears of disappointment. “I really tried,” I said.

“We have no Christmas dinner and Mama will be so disappointed.”

Uncle Joe quickly went out the back door. “Don’t worry.” he said. “I’ll be back shortly.”

Papa and I went into the living room to break the news to Mama who just kept smiling as we explained our dilemma.

“We can have salad and rolls,” I said as I immediately returned to the kitchen to bring in the salad and the freshly baked rolls Uncle Joe and brought.

Half hour later Uncle Joe returned with a sack filled with food.

“Where did you find a store open Christmas Day?” Papa asked.

“I didn’t. I just emptied my refrigerator.  We have an array of cold cuts.  There is turkey, bologna, ham and cheese.  I also have three kinds of chips. And for dessert I have a quart of chocolate chip ice cream to go with your graham cracker dessert.”

Uncle Joe and I place the platter of food on the table and Papa helped Mama to the table.

He then made a little speech.

Uncle Joe laughed. “And I am grateful to have a niece who is so kind and caring. She tried so hard to make a Christmas dinner her Mama would remember.”

“Memories of this Christmas will always bring a smile to our faces. I’ll bet that one day you will tell your children about the day you made Christmas dinner.  And you will all laugh with joy at the memory of that frozen turkey and the frozen bag of giblets,” said Mama.

Mama was a wise woman and the story of my Christmas dinner became a family tradition every Christmas.

My children always begin our dinner with their annual request.

“Come on Mom tell us about the time you made Christmas dinner.”