Moncton Singer-songwriter Hélène Godin, originally from Petit-Rocher, launches her début album Coeur Battant, an excellent recording that will certainly make its way across the Canadian musical landscape. The official launch will take place on Tuesday, October 12, at Café Campus, on the Université de Moncton campus.

To create her songs, Hélène finds inspiration all throughout her surroundings. Love is a recurring theme in her music (Je t’aime tout court, Pourquoi tu souris, Jasmin), as are her hopes and dreams (Je rêve, Guylaine). She is also inspired by the many interesting characters she has met throughout the years, such as Mama Léa. “These are all very personal songs,” says the singer-songwriter. “Writing them was a release for me.”

This album is the culmination of much effort and sacrifice over the past five years, following her highly successful experience at the Gala de la chanson de Caraquet in 2005. “I’ve always known that I wanted to write and create music. There were times when I was afraid that the flame might go out, and that made me sad. I had difficulty believing the fact that I might never again experience the same passion that the Gala awoke in me. It was as if somebody had lent me happiness, and that eventually, I would have to give it back.”

By joining forces with good friend Carol Doucet, who would become her manager, Hélène decided to go ahead with the recording of her first album. She asked singer/musician Robin Anne Ettles to produce the album. Robin accompanies Hélène on nearly all of the album’s tracks (guitar, backing vocals, percussions, keys) as well as on stage.

Hélène is extremely proud of the final product: “Robin has done a tremendous job. I created the flesh and blood of the songs. She delivered them in style!” 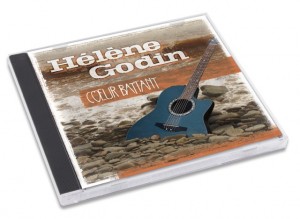 Hélène surrounded herself with amazing musicians such as Maurice Fougère on drums; John Boulay on ukulele on Pourquoi tu souris; Pierre Pître on classical guitar for Dis maman; and René Rossignol on electric guitar for the title track. The record was mixed by Robin Anne Ettles, assisted by John Maher, with the exception of Dis maman which was mixed by John.

In 2003, Hélène performed her songs publicly for the first time. In 2005, she won the singer-songwriter category at the Gala de la chanson de Caraquet. She also won the Coup de Coeur de la ChantEauFête de Charlevoix award that same night. She has been a semi-finalist in the Festival international de la chanson de Granby and participated in the Coup de Coeur francophone during the 2005 FrancoFête en Acadie.

In 2006, she collaborated with dancer Manon Melanson. In June, she was re-invited at the ChantEauFête during which she opened for legendary singer-songwriter Michel Rivard. In August, she performed as a musical guest at the Gala de la chanson de Caraquet.

In August 2007, she was invited for the second time to perform at the ChantEauFête. She has shared the stage with various artists from Quebec. Since then, Hélène has performed in Moncton, Halifax, and Caraquet, among others, and was a guest performer for a cultural/variety tv show, which was broadcast on French CBC. In July 2008, she participated in the Rencontres qui chantent in Petite-Vallée, Quebec, and in March 2009, she participated in the second round of the Rencontres in Vancouver. In August 2010, she was invited to perform during the Festival acadien de Caraquet as well as the Fêtes de la Nouvelle-France in Quebec City.

On November 6th, she will perform during the FrancoFête en Acadie.