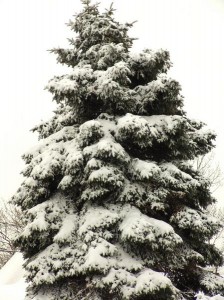 I can recall every year in the fall when the wind carried yellow leaves along the road leaving our trees beside the house bare, my grandfather, Poppa, would hitch up Bessy to the wagon and head down to the sawmill.

It was located out by the river where three mountains of sawdust stood like golden pyramids. As a mere boy, I was happy to be permitted to go along, sitting up on the buckboard seat and holding the reins as if I were really driving the horse while Poppa let the ends trail over his lap, in case.

At the mill he would shovel the sawdust into the back of the wagon. Of course Bessy would walk slower on the return journey. Back home, the sawdust had to be banked around the house in order to stop the wind and coming snow from sneaking in under the floors.

By the end of the day a golden line would run around the base of the square Victorian house contrasting with the black weathered shingles. I watched him do it all, laying fir boughs, and quietly preparing for winter. In fact as a boy I watched him do everything. He would see me watching him and smile. Everything had to be done before the temperature dropped and snow came blowing past the windows.

The small garden beside the house had produced some good potatoes, corn, beets and carrots during the season. Poppa put each vegetable lot into a large basket and stowed them in the dug-out cellar, passing through the trap door beneath the staircase inside the house. Raspberries and strawberries were bottled and preserved, sitting ready in the pantry. Bessy’s field had been cut, hay forked and baled into the barn right to the rafters, her roof tacked down with a new sheet of tar paper, and the woodshed stacked with jags of dry hardwood slabs.

I would watch him, my grandfather, who would be sitting with a glint in his eye beside the Enterprise wood range in the kitchen listening to the fire crackle and the NHL games being broadcast play-by-play by Foster Hewitt on the radio, and come to understand him and the fall, and what it was all about. Then fall was gone soon enough.

Winter was not a time to do anything. His only jobs now in December that I could see were to go out and check Bessy in the barn twice a day, and keep both fires burning in the house. There was a second stove in the living room with a piece of sheet metal nailed protectively over the floor boards. It was the main source of heating for the entire house. He would stoke it three times a day, plus once at night. The stove pipe ran through the upstairs hallway to the roof. It was the only way to warm the upstairs during the cold nights. Sometimes I could hear my grandmother, Mumma, nudging him at 3:30 in the morning to go down and stoke the fire. The stairs always creaked as he descended in his long johns. He never missed this duty. I remember it all so well, as a mere boy in the 1950’s.

By the 1970’s, life had changed in the house. Our family had grown to seven by now, with me the oldest having younger brothers and sisters. I was in college at this time and arrived home for Christmas sporting a shiny blue college leather jacket. The place was basically the same except a little more run down. The horse barn was still there but Bessy was gone. A friend of the family had come by with his gun, and walked the old mare over to the Priest’s Pasture through the trees for the last time.

Mumma too had passed on. So my mother ran the house now.

The wood stoves had been replaced by an oil furnace, run by a thermostat on the wall. There was no garden, not like it used to be, only the rhubarb coming every year. Nearby stores supplied all our food needs. Poppa was still there, although a different man, feeling a little out of place in a different world, sometimes staring at the small round thermostat on the wall, sometimes still getting up at 3:30 in the morning to stoke the fire, wandering about the house looking for the stove, which had long since been sold.

Most of the time he would sit in the kitchen, always smiling if anyone approached him. I would rub his bald head as I spoke to him. The faster I rubbed his head, the more he would smile. He could still remember the old songs, and would render one or two in the evening if he were asked. “I left my home in Sligo, where the pigs and praeties grow . . .” I taped him on the cassette, because I knew that his time was near, and I didn’t want to let him go.

On the evening of December 23rd, my mother asked me about a tree. There was a hesitation. I understood what she was saying. It was my role in the family as the oldest male. I knew that the idea of buying a cultivated tree was remote to her, and even myself. It was how I had been brought up, that with all of the trees in the forest, it was unthinkable. For her, Poppa had always taken his axe and sleighed into the woods with Bessy. Always he had returned with a beautiful evergreen, and the entire family would bustle around getting it decorated before midnight mass. But Poppa was no longer able to do that.

Now it was my turn. I saw Poppa looking at me across the room, eyes watery, sitting erect in his chair, just watching. At noon the next day I threw on my shiny jacket, slipped on my grandfather’s gum boots, and set out with a hand saw. The snow was deep through the field past the Fox Ranch. After 10 minutes of slugging though the drifts I had reached the edge of the forest, where the snow became even deeper. Here I stood still and listened as my breath hung in the frosty air. What did she want, I asked myself, fir, pine, or an old spruce?

I trudged on among the trees. It was beginning to feel chilly. My jacket was too short and sometimes my bare back would be exposed if I raised my arms. I seemed to recall that Poppa always wore a one-piece woolen long johns under his shirt and leggins, with a good cardigan over that. “No break in the tar paper made the warmest house,” he had said, meaning no place for the wind to touch his back. I zippered up my thin jacket and tried to concentrate on the task before me.

The perfect specimen was a fir, about seven feet high, full bodied, symmetrical. I was a bit tired. Poppa would have had his tree by this time, I reminded myself. By three o’clock I had zigzagged through the alders, crossed Williston Road, followed the Church Brook until I had reached the bottom of the Cross Road’s Hill, almost a mile from the house. There were raucous crows in the treetops over me, cawing and creating the worst racket among themselves. I looked up to count them. Then I saw it.

It was the most beautiful tree I had ever seen. The lights were already on it. I stared at it for a good five minutes. The problem was obvious. It was the tiptop of a 30 foot tree. How could I ever reach it. I placed the saw on the ground and leaped to catch hold of the bottom limb. Snow plopped onto my face, and I dropped back down. I looked at the saw again. Then I understood everything. With great exuberance, I raced back through the trees, across the field until I came to Bessy’s Barn. It was four o’clock. I sneaked in and replaced the saw with the axe, and the jacket with a lined woolen coat. By 4:30 I had returned to the tree, bringing along a short rope tied around my waist.

I now had a choice. I could chop down the entire tree to get at the top, or I could climb and sit on a limb and do the job. For whatever reason, I chose the latter, and tied the axe to my waist with the rope. I managed to reach the bottom limb and pull myself up to the middle boughs of the tree. Then I wedged the axe carefully against the limbs while I tied the rope around the stock and myself at the same time to secure from falling backwards.

On the first magnificent swing, I slipped. But the rope had done its job, and I dangled for a few seconds among the branches before I hoisted myself back up. After that I braced my feet better, and did not swing so hard. By little chips and chops letting the axe do the work, a “V” was nitched in one side. When I struck the other side, the top began to gently lean and finally topple down to the ground. I descended now fast limb by limb to the ground. I set out for home carrying the axe in my left hand and hauling the tree with the rope leaving a furrow in the snow. The horizon was beginning to turn red, and the forest had darkened a little when I arrived home.

I walked into the kitchen. My mother was at the stove priming the keymac for supper. She turned around with eyes bent on me. “Well, did you get it?” She followed me out to the back step, accompanied by my excited brothers and sisters, and even Poppa coming last. It was a spruce tree.

“Thank God,” she declared. “It’s beautiful!” my oldest sister said. I retrieved the saw from the horse barn and sawed off the base so that it was flat to nail a wide board on. I can still remember us decorating the tree that evening. I used the same rope to hold it up against the wainscot wall. Poppa sat at the table. I saw him looking at me, a light in his eye. Everyone was helping to pass the lights along the boughs and hang the icicles. When it was all decorated with the star on top, the switch for the room lights was turned off. It was dark. Suddenly the tree lit up, a spectacular illumination. The tree belonged to us all. Then we dressed for church. Poppa stayed behind to keep an eye on the tree. He watched us from the window as we went in a line along the snowy path across the field to St. Samuel’s Church.

Today, those days are gone. No one goes into the woods anymore to get a tree. It is illegal. I am getting old like Poppa, and living alone. Another Christmas has come, and I am wondering if I should go down to the local mall and shell out $25 or $50 for a fir. It has been a while since I put one up. But if I do, it will be on Christmas Eve, and not before.