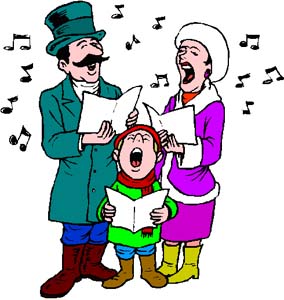 It was a picture book Christmas Eve. Snow was falling and lawns were covered in white. Homes were framed by the coloured lights of evergreens and lawn decorations.

The door of the brightly lit home opened and the Bensons, a handsome couple, greeted the carolers.

“You sing beautifully. We’ve never had carolers before. Please come in and join us for some hot chocolate and dessert,” said Mrs. Benson.

They were having a Christmas Eve party and the table was laden with pastries filled with heavy creams, fruits and nuts. It was a table fit for a king.

The tree was magnificent, filled with an abundance of ornate ornaments. Several beautifully wrapped gift boxes lay under the tree.

Three needlepoint stockings hung by the chimney. The lead caroler, Sara, was very observant. She noticed the names Mary, Robert and Joshua. stitched at the top of the stockings.

“Are the children asleep?” she asked the lovely hostess.

“My son has been sleeping for some time,” answered Mary.

“He tried to stay awake so that he could hear Santa’s reindeer but he was sleeping soundly by the time my husband finished the ‘The Night before Christmas.’”

“Is your daughter also sleeping?” asked Jana, the youngest of the carolers.

“We have only one child,” said Mary. She was smiling, but her eyes were filled with sadness. “We had hoped for other children, but it hasn’t happened.”

“By next Christmas you will have a daughter and she will be beautiful just like her mother,” said Sara.

Mary looked at Sara in bewilderment.

The carolers said their goodbyes. Once outside Jana commented on the three stockings. “There was not one for a little girl.”

“Not this year,” said Sara. “But there will be one for her next year.”