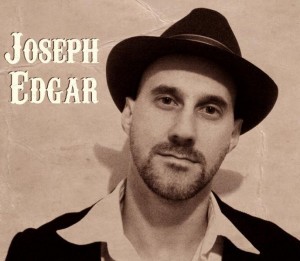 Two and a half years after the release of oh ma ma, Joseph Edgar offers the public a third album. Entitled Y’a un train qui s’en vient… (There is a train a-comin’), the cd will be on sale Tuesday May 5th.

The Acadian singer-songwriter, former lead singer of the popular now inactive band Zero ˚ Celsius, delivers a record consisting of 11 new songs, most of which were created during the last year. Since early April, the first single “Rêves volés” (Stolen Dreams) was launched to radio stations and on the Internet and has aroused great interest among critics.

The song has already made its entry on the list of Francophone community radio stations in the Atlantic, and even if it is a D.I.Y. production, the music video for this song has come a long way on various websites.

Teaming up once again with producer Marc “Chops” Arsenault (Pascal Lejeune, Petunia, Serge Brido…), bassist for Les Païens, band whose members are part of the core team of the album, Joseph Edgar says that this record has finally fulfilled his desire to make an album which mission was to “reach as close as possible the energy and strength of the live show with a sound experience that can only be explored in the studio.”

The singer adds that he managed to get the sound he was looking for “through the magical talent of all those who played on and with the songs, and especially through the passionate work of the producer who also acted as engineer and mixer.”

In addition to the other members of Les Païens (Jean Surette, Denis Surette and Sébastien Michaud), other musicians that participated on the album are Isabelle Thériault, Chris Colepaugh, Carey Beck and Lisa LeBlanc, among others.

Joseph Edgar was winner of the Artist of the year award in music at the 2008 Gala des Éloizes for his album oh ma ma released in fall 2006 from which the song “Fantôme de Blanchard” succeeded to capture the attention and praise from some big names in the Quebec scene, such as Daniel Bélanger and Ariane Moffatt. We often hear that Joseph Edgar is the heir of Zachary Richard!

In mid-May, Joseph Edgar will travel across the Maritimes to promote the album with his “Tournée du tounerre” with Les Païens. During his stop at the Capitol Theatre in Moncton on May 23rd, Oumou Soumare, Georgette LeBlanc, Isabelle Thériault, Lisa LeBlanc and Brian Coughlan will also be added to the show. Joseph Edgar will be in Montreal early June.

The details of the tour and other information can be found on the artist’s web site: www.myspace.com/josephedgar as well on his Facebook page.

Y’a un train qui s’en vient… is distributed in stores and on the Internet by Distribution Plages (www.plages.net) and will also be available on the websites zik.ca and iTunes.