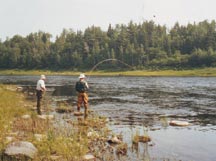 Heading south from Miramichi City to Fredericton on Route 8, just past the Blackville Village limits sign, you find the Barnettville Road—a dead-end side road, a few kilometres long. It’s the kind of place people sometimes say is, “so far back in the woods, you have to come out to hunt.”

But actually, whether you’re looking for wildlife with guns or cameras, the dead-end of the Barnettville Road is a pretty good place to start. I know because that’s where I grew up, just a few houses away from one of the best fishing, hunting, wildlife and nature guides that the Miramichi has to offer—Kim Jardine. The owner and operator of Jardine Cast & Blast has guided nearly all his life.

“I never liked to work inside,” he says. “I like the outside and the wilderness.”

It’s true. Growing up, I remember summer afternoons at the river where everyone came to swim; a then-teenaged Kim would seem to appear at the edge of the woods like magic, without a sound of warning, after hours of hiking and observing nature. He knew where the snakes nested and could see the practically invisible partridge blending into leaves. If you wanted to get close to a deer, Kim could get you there. If you wanted to catch a fish, Kim could show you how. If you wanted to see a bear, Kim knew where to find them. And he still does. With dozens of years experience behind him, he understands nature and wildlife and knows the region’s forest like the back of his hand.

His dream has always been to own and operate a lodge of his own.

“I always wanted to do it,” he says. “I wish I could’ve done it 20 years ago. I always guided for everyone else.”

Over the years, Kim has managed hunting and fishing lodges for other owners and guided for other lodges, eventually starting his own business called Jardine Guide Services, which he ran for seven years. Finally, last year, Kim’s dream of owning and operating a lodge came true when he and his wife, Faye, opened Jardine Cast & Blast.

Nestled in the woods overlooking the Southwest Miramichi River, the lodge itself is beautiful—a mix of rustic down home charm with wood walls and ceiling, mounted trophy deer on the wall, and antique tables, combined with modern amenities like a full kitchen, full and a half baths, laundry facilities, telephone, fax and satellite tv. It’s large enough to comfortably accommodate six people and easily accessible by car. Full-course meals are included with accommodations and the cooks promise you’ll never be hungry when you leave the table.

“You can come here and have a great time,” Kim says. “It’s a different kind of place. We do everything.”

And he means everything. From the spring and autumn Black Bear hunts to the small game seasons and the deer and moose hunts, Kim and his team of licensed guides are in the woods ready to lead the adventure. There’s nothing quite like coming face-to-face with an 800 pound moose or 300 pound Black Bear. It’s an experience you’re not likely to forget anytime soon.

Fly fishing is, of course, the long standing tradition of lodges on the river. At Jardine Cast & Blast they teach beginner’s fly-casting and offer father and son fishing packages in addition to the usual guided sport fishing. Lately salmon numbers have been increasing in the Miramichi.

“There’s been a big change these past couple of years in fish stocks,” Kim says. “They ran all summer this year.”

He recalls one day this season when he looked out at one of his guides who had hooked a fifteen pound salmon that he was trying to land. All of a sudden a grilse jumped into the boat, whacking the guide on his knees.

“I’d heard about that happening before,” Kim laughs. “But that’s the first one I’ve ever seen.”

While traditional sport fishing and hunting is a big part of what they offer, the Jardine Cast & Blast lodge is open year-round and they hope to tap into the broader tourism market by offering guided nature adventures to individuals and families who just want to get away, relax, and commune with the forest and wildlife.

The way Kim talks about how he’s looking forward to snowshoeing back to the beaver pond everyday to boil the kettle, enjoy a cup of tea and have a say, certainly makes you want to go with him at least once this winter. He makes it sound almost meditative and spiritual, very relaxing, and so much fun. This has got to be the good life people are always talking about!

Kim thinks there’s no life like the one you’ll find exploring our nature and wildlife and he hopes he can continue doing that everyday for a long time to come.

“If I can get the clients, I’ll never the Miramichi,” he says.

To find out more about Jardine Cast & Blast or to see more pictures visit their website at www.jardinecastandblast.com.