﻿
Dangers of Living on the Prairies
By Lois Bourque

My name is Lois Bourque (Cripps). I was born and raised on the beautiful Miramichi, daughter to Ray and Joan Cripps. I married Patrick Bourque from Saint John. In June 1980 we 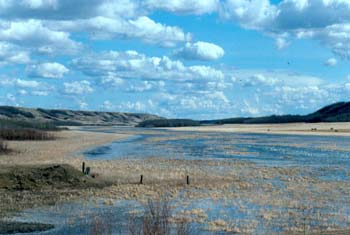 decided to leave New Brunswick and move to Alberta. We live just east of Lethbridge.

At first I really missed the Miramichi, always felt misplaced here, but soon this became our home. We have five children, four of them born here, and now grandchildren. We have experienced a lot while living here, normal things with kids growing up, broken bones, accidents, baptisms, first communions, graduations, weddings, etc. We experienced our first tornado in 2005. We have seen many funnel clouds in our area before but this one we watched form and actually land a few kilometres away.

Nothing we experienced here could have prepared us for what happened last July. My husband Pat is an avid fisherman, goes out every chance he gets. He does ice fishing in the winter and lake or river fishing in the summer. One of his favourite spots is the Old Man River which runs through the Coulees here. He would come home from work, go and pick up our two oldest grandsons, Austin and Dallan, and head for the river to do a little fishing.

Last summer my brother-in-law came out to visit us from Ontario. Pat was anxious to take him to his favourite fishing place, so they picked up the boys and away they went. Should have been a normal night of fishing, but they did not make it to the water.

They parked the car just off the gravel road and proceeded down the path through the grass towards the river. Pat was in the lead, two grandsons behind him and my brother-in-law after them.

All of a sudden Pat spotted a rattlesnake within inches of his feet. He panicked thinking one of the little guys was going to get bit, so with one hand he swatted at the snake and pushed the kids back with his other hand. He had a Tim Horton’s coffee cup in the hand that he tried to shoo the snake away with, but the snake bit him, one fang in the cup, the other in his hand.

Immediately he started to feel what he called buggy. He tried cutting and sucking out the poison, but began vomiting out of control. My brother-in-law phoned 911 and they told him to head to the hospital and they would send an ambulance to meet him on route. He got Pat in the car, the two boys settled in the back and headed back towards the highway where he was met by the ambulance.

By this time Pat was blind and incoherent, he was having a really hard time to breathe. My brother-in-law then phoned me and said, “Pat was just bit by a rattle snake and is on his way to the hospital in an ambulance. I am coming to pick you up. Get Pat some clean clothes because he got sick on himself.”

I hung up the phone and really was not that worried. I knew all the hospitals in our area had Antivenin on supply and thought that I would go there and we would be coming home in a couple of hours—WRONG! 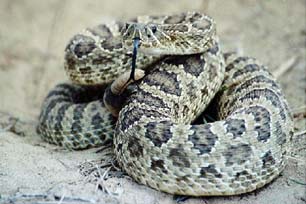 One of the paramedics that brought him to the hospital came out and asked if his family was there, and the nurse pointed to us,he came over and told us that Pat had a really rough trip going to the hospital. He had gone into Anaphylactic shock, he said they did all they could do for him on route and the doctors were working on him. That is when the panic rose for me. I asked the paramedic if he was going to be all right and all he could tell me was that he hoped so.

Finally a doctor came out, took us to the quiet room and told us what was going on. He said they were having a hard time getting a tube down Pat’s throat because his tongue was so swollen, and they were trying through his nose. He said things did not look good. Pat was obviously allergic to the venom and they were not sure how he would react to the antivenin. There had not been a lot of snake bites in that hospital and he was the first to have an allergic reaction so they were not sure what would happen next. He said I should phone all our family here, stay in the room and he would be back to update me ASAP.

They did finally get a tube in Pat’s nose by breaking his nose. I guess his nose was not straight and they could not get the tube in otherwise. Finally after a couple of hours the doctor came back to see me and said that they were bringing him to ICU. They did not know if he was going to make it through the night. They brought us to the room to see him before he went up. They warned us he was in bad shape and would have a lot of tubes and machines on him, but nothing could prepare us for what he looked like. He was swollen to almost twice his size, tongue so swollen it was protruding out of his mouth. I could only cry when I looked at him. This was the man I loved for almost 30 years, the father of my children, he was my life. I prayed so hard to God to please give me more time with him.

He spent the next four days in ICU in an induced coma. We continued to pray and always had someone at his side. They gave him continuous doses of the antivenin and finally the poison began to stop spreading up his arm and the swelling came down a lot. On the fifth day they woke him up and removed the breathing tube. They kept him in ICU for another two days and he was able to come home. No one could believe this, no one was sure he would even live, but he made it. He left the hospital with an Epi-pen so he can inject himself if he ever gets bit again—yikes!

In the many months since this happened, so far there is no permanent damage. They expected there to be tissue damage to the bite area but he has healed good. I do feel that it has taken a lot out of him as he seems to tire so much easier these days. He has not gone fishing since that day. He did not even go ice fishing this winter.

Pat made two mistakes that day that almost cost him his life. First, he probably could have avoided the snake by moving away. The snake can only strike half its body length. But he panicked, fearing for the safety of our grandchildren. Second mistake—trying to suck out the poison. We have all seen the western movies where the cowboy sucks out the poison and gets back on his horse and rides away, but that is not true. Cutting and sucking out the poison poses two dangers. First, it gives the poison another avenue to travel faster through your body and second, it increases your chances of tissue damage to the area. Also many people say he is lucky only one fang got him but that also is not true. It does not make a difference if one or two fangs got him, it is the venom itself.

I still love living on the Prairies, this is our home, but I am more aware of the dangers that are here too. There have been a few more snake bites here since Pat was bit. One woman was just weeding her garden . . .