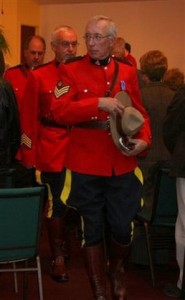 Christmas Eve had finally arrived. Our children had many gifts under the tree and Santa would bring even more. My husband, a young policeman serving in the RCMP, was working that Christmas Eve, so our annual Newfoundland Chowder and Newfoundland Food Open House was rescheduled. The children were already in bed and the house was quiet and comfortable.

Outside the night was bitterly cold and blustery, but the Christmas lights looked festive. Our street had homes that lacked for nothing, at Christmas time or otherwise. We were all baby boomers with double incomes and two children families who were enjoying life to the fullest. I knew that for some Christmas was dreadfully excessive, the very thing I disliked about it, and still do. There would be too much food, drink, parties that cost a fortune, and limitless gifts. Our lives were full as we worked and raised our families.

But, as for me, I knew about being poor, from some of my patients and certainly from my mother, who suffered through a rough and poor childhood, stories about which she shared with us. She always says, even now at the age of 79, that even if she has “a tube of toothpaste to unwrap on Christmas morning,” she’ll appreciate it. She had many Christmas mornings with nothing whatsoever. We always made sure she had a gift, and my father has always treated her lovingly. She appreciates it so much and shares with others.

As I was thinking all of these things over in my mind, I began to wonder about my husband. During supper he had received an emergency call and left hastily. I always hated those calls. I knew he got them all the time but I would rather not know. I was concerned for him and wondered what mess he had to deal with this Christmas Eve. The last Christmas he worked he had the terrible job of taking a clergy man with him to tell a woman her husband had been killed. It was so very difficult for him to say the least, his soft heart often made some situations very difficult for him. But, being a nurse, I understood exactly what he was going through. Sometimes he would talk, and at other times he would just not verbalize anything, becoming very distant and quiet. I found that extremely difficult.

He had no time to spare he explained as he removed his heavy clothes and proceeded to tell me the story as he plunged under the Christmas tree. He gave me instructions to make up a food box and get the clothing that was ready to go to the Goodwill Store packed for him to take with him. I went into action and listened as he told his sad story.

His call during supper had been a domestic dispute. The two parents and another couple were drunk, the Christmas tree had been destroyed in the drunken brawl, no gifts were anywhere to be seen, and the heartbreaker for him was the two little children sound asleep in snow suits, with nothing on their feet, sleeping on a urine-soaked mattress on the floor. The house was freezing, and everything in a state of disarray, the only ornaments were beer bottles. There would be no Christmas for these six and four-year-old beautiful children. That they had not awakened when the police were breaking up the fight and arresting their parents showed they were accustomed to this type of situation.

I knew the family through my work and knew this was a common occurrence in that household. The one shining light was a sister-in-law who arrived to take the children. She put warm blankets she had brought around the two tender children and took them away to her home. She was used to this she told the police. But her concern was that she had no clothing, gifts, or extra goodies on hand, having four children herself. My husband and his fellow officer said they would do what they could.

So this was how I found myself sitting with my ashen faced, distressed policeman husband that Christmas Eve. He pulled out one gift after another from underneath the tree and passed it to me to see if it was something for a child. Our children had more than enough, those gifts would not be missed, but they would make Christmas for two unfortunate children, whose Christmas had been stolen by drunken parents. One by one we made a pile of little gifts, I gathered up some of my daughter’s many stuffed toys, pulled out two warm blankets, and together we had a Christmas made for two children, all in half an hour.

When he thought he had enough, he turned the police cruiser into a Santa sleigh and left. The children, in spite of all, would have a visit from Santa, the two policemen would see to that. By the time the parents were released from the drunk tank the next day, their children would be celebrating Christmas at their aunt’s home.

It would be a Christmas for them, a Christmas kindly provided right down to the last detail, by two Santas who did not wear full red suits but often wore bright red coats.